Do the photos in your home keep you frozen in time?

The photos you have around you can create a feeling of being frozen in the past, which can mean you’re not fully emotionally available in your relationships in the present. 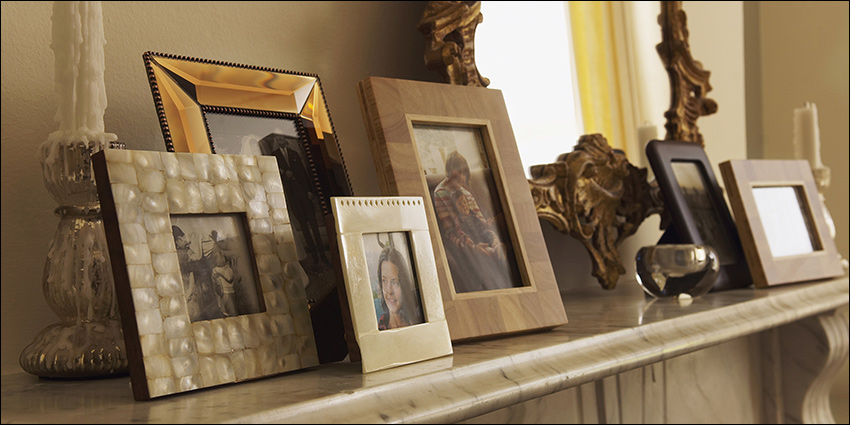 ‘Enjoy your photos while they are current. Make colourful montages, put them on the wall, stick them on your notebooks, make postcards and send them to your friends. Really get the most from them while their energy is fresh and new.’

This advice comes from Chapter 11 of my book, Clear Your Clutter with Feng Shui. But many people who read this think it surely doesn’t apply to the framed photos they have in their home of themselves or their children when any of them were younger.

If the majority of the photos you have around you depict images from the past, this can keep you from being fully available to live in the present. The reason is that a photo can be a form of sentimental clutter. It can become something more than just a functional way of capturing a moment in time. It may serve as a way of linking to a memory from the past. And if you see these types of images day after day, year after year, they will have an effect.

Take the example of wedding photos. Many couples keep a photo of the happy day on display in their home. But each time they look at it, it connects them to the past, not the present. And many people find there is an unconscious internal dialogue with accompanying mixed emotions that develops over time.

Supposing you have put on weight since that photo was taken. Each time you see the image of a thinner you, it can spark a comment from your inner critic, causing you to feel bad about yourself. Or perhaps it sparks a memory of how romantically attentive your partner used to be and how that has changed. Or it reminds you of the life you dreamed was ahead of you on your wedding day but it has not quite worked out as planned.

Even if you are wonderfully happy in your relationship with your partner today, wouldn’t it be better to have a happy photo of you both as you are now instead of one from years ago, with all the clutter of these types of internal dialogue attached? As one woman told me, ‘replacing our old wedding photos with more recent ones of my husband and I allowed me to feel the richness of what we created together over the last 20 years instead of constantly being reminded of how naïve and immature we were when we first got together.’

Childhood photos are another way that relationships can become frozen in time.

In one home I visited to do a consultation, the couple’s son had grown up and left home but the parents still had many framed photos of him as a child on display, as well as shelves full of awards and sports trophies he had won. The son didn’t care at all about these items and hadn’t wanted to take any of them with him when he moved out. But they lined the walls of the parents’ home, and his old bedroom had turned into a mixture of a junk room and a museum of his past.

Everywhere you looked there were mementos of the son’s history and achievements. Sometimes one or both of the parents would be included in a photo, but the son was clearly the star of the show. It was all centred on him. They had been living their lives through him but now he had moved on and they had not. Not surprisingly, they felt stuck.

The remedy was simple. Replace the old photos of their son with more recent ones of themselves or images that reflected aspects of their own life, not their son’s. They chose to put up photos of places they wanted to visit together and were astonished at the difference this made. Instead of being anchored in the past, they started looking forward and their lives started moving again.

Another woman, with a husband and three sons aged 9, 13 and 16, realized that all the photos of them in the family home were at least six years out of date. While part of her wanted to hold on to fond memories of her sons as young children, another part could see that this wasn’t encouraging them to grow up and take responsibility for themselves. ‘Removing the photos has allowed me to see my husband and boys as they are right now and a new sense of appreciation for them and who they are has grown,’ she told me.

Your parents’ photos of you

If your own parents are alive, you may also want to consider if you really want them to keep photos of you as a child on display to constantly remind them of you when you were young? Or would it be better for them to have more current photos that portray who you are today?

It happens all too often that parents secretly do not want their adult children to become fully emancipated. Having photos of them as young children prominently displayed in the home is a very socially acceptable way of holding on to a phase of a parent-child relationship that has long since passed. And some adult children also collude in this, preferring to postpone the full responsibilities of adulthood for as long as they can.

You may, of course, have no say at all in what images your parents choose to display in their own home. But if you know they have a tendency to treat you as a child and you’d like to change that dynamic, a very effective way to help that process along is to supply them with current photos of yourself from time to time to replace the childhood images they have. Updating those will have the effect of updating their relationship with you too.

Photos in the bedroom

A common mistake people make is having photos of their parents, children or a spiritual guru on their bedside table. If you have an active sex life and would feel comfortable having sex with any of these people watching in person, fine. If not, make your bedroom a no-go area for such photos.

The reason for this is that we are deeply affected by images of eyes. A psychology experiment on a phenomenon known as priming has shown that, on average, people will contribute three times as much to an honesty box in an office kitchen when an image of human eyes is stuck behind it on the wall. And this happens whether they consciously see the image or not. Being watched, even by someone’s eyes in a photo, makes us self-conscious and changes our behaviour.

Is it better to have no photos at all?

Of course I’m not suggesting you never have photos of anyone in your home. What I’m advocating here is that you become more selective about how long you display them and where you place them.

Any image you see many times a day will affect you. So it really makes sense to choose those that will nurture and support you and those you care about, not ones that will hold you or them back.

7 Responses to Do the photos in your home keep you frozen in time?