Why nature art is better for your health than abstract art

The artwork you have in your home is a very personal choice. But do you know that some choices may be much better for your health and well-being than others? 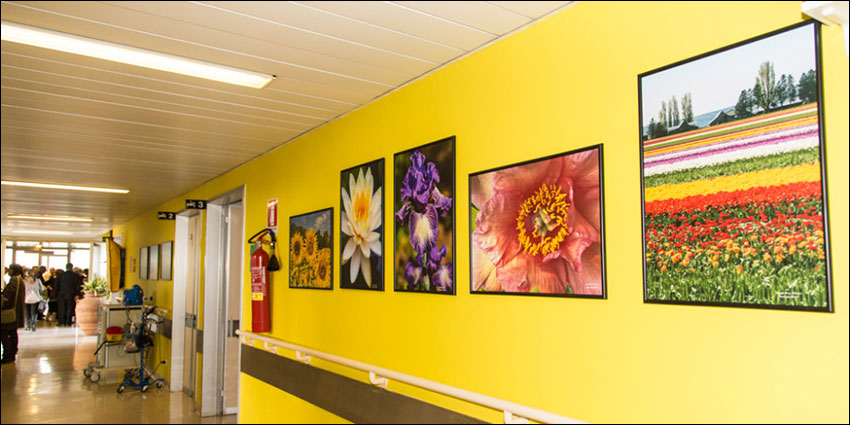 The healing power of nature

Anyone with an ounce of common sense knows that people feel more nurtured when they can see trees. But it took a 9-year study conducted in a Pennsylvania hospital by healthcare design expert, Roger Ulrich, to actually prove it.

The study was completed in 1981, but Florence Nightingale was on to this more than a hundred years before him when nursing injured soldiers in the Crimean War. She found ways to give her patients fresh air, sunlight and nature views whenever possible. And as the paintings of  Victor Tardieu show, she was so convinced this helped her patients to heal that she made sure there were brightly coloured fresh flowers on every ward. And she did this in Istanbul. On the front line. In the middle of a war!

Little as we know about the way in which we are affected by form, by colour, and light, we do know this, that they have an actual physical effect. Variety of form and brilliancy of colour in the objects presented to patients are actual means of recovery. – Florence Nightingale

More recently, Oliver Sacks, bestselling author and professor of neurology at the New York University School of Medicine until 2007, attested in his book, Everything in its  Place, that in forty years of medical practice he had found gardens and music to be the only two forms of non-pharmaceutical therapy that were vitally important for patients with chronic neurological diseases.

I cannot say exactly how nature exerts its calming and organizing effect on our brains, but I have seen in my patients the restorative and healing powers of nature and gardens, even for those who are deeply disabled neurologically. In many cases, gardens and nature are more powerful than any medication. – Oliver Sacks

How nature views and images affect us

Ulrich’s researches showed that not only did patients recover quicker when they had nature views or images of nature views, but they needed less medication, less nursing care, and gave better satisfaction ratings about their stay in hospital. Staff and visitors also stated how much better they felt too. The ears of hospital administrators perked up at these findings and they became more receptive to the idea of investing in nature artwork.

The Foundation for Photo/Art in Hospitals, founded by Elaine Poggi in 2002, has so far placed over 7000 nature photos in over 400 facilities on 7 continents. The photo at the top of this article shows an example of the colourful nature images adorning a hospital corridor in Italy, and what a difference this can make. The organization’s motto is ‘humanizing hospitals through healing photo art’ and the images are all donated by artists and photographers.

I have heard that some hospitals have taken this a step further and offer an “art cart” service, where an employee or volunteer takes a cart containing pieces of art from patient to patient, inviting each person to select the images they would most like to have hanging in their room during their stay. This is a very long way from the blank, cheerless walls that used to be the norm in most hospitals and still are in some.

Artwork in the home

People who are sick are at their most vulnerable and in a confined space so are the most noticeably affected by the imagery that surrounds them. That’s why there’s been so much research done about this in hospitals.

But we can all use this knowledge to make better choices about the imagery we have in our own homes too. The same types of images that support and nurture us when we are unwell will also help to sustain us in good health.

Best of all, of course, is having real view of nature through the windows of your home. But for those who do not have this, the next best thing is images in the form of photos, paintings, posters, and so on.

Which nature images are best?

It’s been found that the most revitalizing images to surround ourselves with are those of flowers, landscapes, waterscapes, non-threatening wildlife and friendly human faces.

Flowers
For maximum effect, choose images of colourful flowers in bloom. Unhealthy, droopy or dying flowers will bring your energy down instead of lifting it up. Flowers you are familiar with are more nurturing than exotic specimens you’ve never seen before.

Trees
Images of trees are good, especially those with wide canopies that create an environment of shelter for all the life-forms that live on them. Trees in full foliage are generally better than those with bleak, barren branches, although some autumn scenes with vibrantly coloured fallen leaves can be very picturesque.

Landscapes
The best landscapes are those with depth or an open foreground, such as a garden with a lawn at the front and flower borders in the background, or rich, verdant countryside with low plants or grasses at the front and taller vegetation, trees or mountains behind. Familiar cultural images such as rural buildings or local scenery can be very heart-warming. Relaxed humans or animals in the foreground send the message of “this is a safe place”.

Waterscapes
The most nurturing images are those that show calm or slow-moving water set in a beautiful landscape.

Non-threatening wildlife
The best images are those of baby animals, attractive birds and animals that are known to be generally friendly to humans.

Smiling or sympathetic human faces
These types of images are more subject to personal interpretation so have to be chosen wisely. However, they are definitely preferable to images of people expressing other emotions such as indifference, sadness, hostility, and so on.

The problem with abstract art

Multiple studies have concluded that the least nurturing form of imagery is abstract art. Some types of modern figurative art (semi-abstract but based on easily recognizable things from the real world) may be OK, depending on the content. But outright abstract art is fraught with problems because of the multiple interpretations it invites and the stressful effects this can have.

What has to be understood here is that most artists are not connected to a Divine muse. They may like to believe they are, but it’s very rare. Most are driven by what is out of balance in themselves, and the resulting artwork is an external depiction of some aspect of their astral body (their mind and emotions). The astral body is the veil that prevents us from connecting to the higher parts of ourselves that can truly connect to the Divine, so abstract art is usually very far removed from this. It is the rawest form through which a person’s astral body is expressed.

Further clues come from the fact that abstract art is widely used by art therapists as a way of helping people to connect with and express their deepest anxieties. This can be an important part of a person’s healing but the result is not something you would want to hang on your wall so that you continually bring the frequency of that into your own space.

Even famous abstract art needs to be assessed from this standpoint. A 2008 study by Terry A. Rustin explored understanding the experience of mental illness through artwork, and he cited Jackson Pollock, who was a depressed, often suicidal alcoholic. ‘A film of him painting shows him working at a hectic pace; he appears to be expressing his internal chaos on the canvas before him’, he said.

Everything I’ve explained so far about nature art is totally compatible with feng shui teachings. But feng shui goes even further and looks at the colour, shapes, composition, symbolism, positioning and energetic frequencies of imagery and how this affects the occupants of a place.

I give an example of this in Clear Your Clutter with Feng Shui, where I describe the home of a woman who had a huge, mournful portrait of herself, painted in dark, sombre colours, positioned in the most dominant place in her lounge, next to the doorway that led to the kitchen. She must have seen that portrait a hundred times a day, and I knew immediately from the way it affected my body that she must be depressed. It had cost her so much money she was loath to get rid of it, so I persuaded her to at least take it down for a month or so and see how that felt. She was astonished at how much better she felt without it and never hung it up again.

The symbolism of imagery is also important. Lonely people tend to have solitary images around themselves, such as a photo of a single flower in a vase instead of a bunch of flowers, a single tree instead of a group of trees, or a single animal instead of a group of animals interacting with each other. Consciously changing the imagery from single items to pairs or groups changes this frequency in the space and can bring about a corresponding change in the person’s life too.

Movement is another important factor to consider. In parts of the home where stagnant energy tends to accumulate, it is better to use imagery that portrays movement in some way rather than a static image. But this needs to be balanced. There’s a big difference between the energetic effect of a painting that shows gently lapping waves and one that depicts a tempestuous storm.

What is interesting to note is that you really can’t go wrong with an image of a bunch of flowers. When faithfully depicted in a photo or painting, it’s the type of image that is least likely to be imbued with the mental or emotional imbalances of its creator. You can also place it anywhere in your home and it will enhance the space. It’s no coincidence that artists have been creating images of flowers since paints and canvases and photography began. They look good and they do you good.