Death to clutter baskets and bowls

Do you have open baskets or bowls in your home that you use to collect miscellaneous jumbles of things? Call them by their real name. They’re all just clutter magnets. 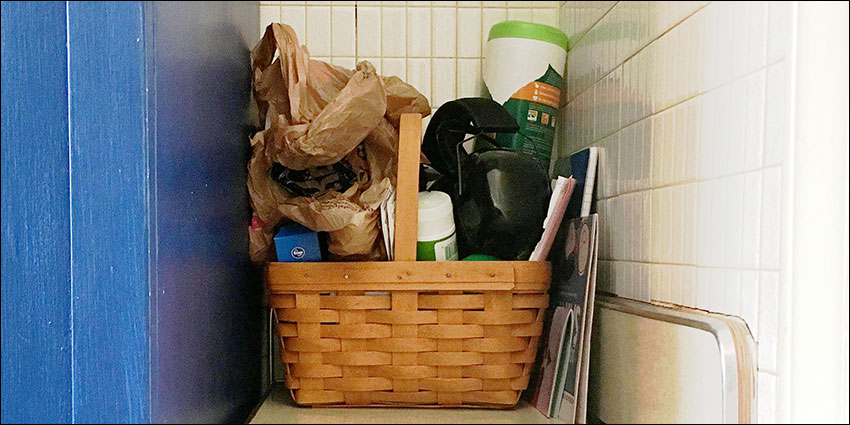 It’s rare to find a home these days that doesn’t have an inexpensive basket or bowl where assorted things collect. It doesn’t usually look very pretty, just functional. It’s like a junk drawer that doesn’t require the effort of being opened. Or a dustbin that you don’t have to remove the lid from. You can just chuck things straight in.

And these obliging little baskets and bowls don’t just collect junk. They also collect dust — large quantities of it that are impossible to clean out without emptying and sorting through the contents first. Which rarely if ever happens.

So they’re an eyesore, a dust trap and a clutter magnet. And if you keep one for a while, dull, stagnant energies will accumulate around it too. Delightful, eh?

Why would anyone want a clutter basket or bowl?

I don’t think anyone decides they want to have a clutter basket or bowl (or two or three) in their home. It happens unconsciously. And the clue is in the receptacle itself, which usually has no clear purpose of its own. It might be a left-over basket that a gift of some kind arrived in or an orphaned bowl that doesn’t belong to a set. In other words, it’s clutter itself. And clutter attracts more clutter.

It usually begins with one item that you put in the basket or bowl “just for now”. And then gradually, inexorably, it fills with other things. An organized person may fill it with similar items such as stationery, souvenirs, and so on. But it’s more likely to become a catch-all for things that don’t have a home anywhere else.

What the contents of a clutter bowl can reveal

You may be interested to know that in my professional work, I find that these innocent-seeming baskets and bowls are a fairly reliable indicator of how chronically disorganized someone is and how close they are to developing hoarding disorder.

For example, I once helped an intelligent professional woman to declutter her home office. It was piled high with paper of all kinds, which was relatively easy to sort through and organize. But it was all the little items she had randomly dropped into several open bowls around the room that worried me because there was no rhyme or reason to her method at all. Each bowl contained a wide variety of things, ranging from pieces of candy, jewellery and loose razor blades to fluffy toys, credit cards and hairbrushes.

She wasn’t using the bowls to keep things “just for now” but forever. Something in her decision-making process was broken. When asked, it was utterly beyond her to sort the items into their categories and create homes for them where they belonged or let any of them go. I predicted (rightly, it turned out) that she was on the verge of developing hoarding disorder. Her clutter bowls were a micro version of what was happening in macro in the rest of her home.

First, understand that life works better without clutter baskets or bowls. You really don’t need one. I’m tempted to say you can pick yours up, throw the contents in the bin, and you’ll probably never miss anything in it. But I know most people won’t go for that.

So find a clear surface, empty it out, and begin sorting the contents into two piles: Keep or Let Go. Use The Clutter Test to decide which pile each item goes in.

If you decide to keep something, create a place where it lives and put it in its new home.

If you decide to let something go, make a decision then and there if it goes in the bin, goes into recycling, gets repurposed, gets donated to charity, is gifted to someone you know, or what. Within 24 hours, make sure each item finds its way to wherever you have decided it will go.

That’s it. You’re done. Except for one thing.

The final decision is what happens to the clutter basket or bowl itself. If you decide to keep it just in case, guess what? It’s bound to fill up again. The only way to prevent this is to let it go too.

You may think junk drawers are just as much a problem as clutter baskets and bowls. But in my view, they’re not. They’re a defined space that can’t easily overflow, for one thing. They’re closed, not open, so they don’t create visual clutter for another. And they don’t gather dust in the same way that open containers do.

So that’s my advice about clutter baskets and bowls. They’re a form of clutter that’s often overlooked but your home will look and feel so much better without them.

2 Responses to Death to clutter baskets and bowls