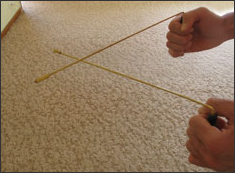 My book Creating Sacred Space with Feng Shui , contains a whole chapter on geopathic stress, explaining what it is and how it affects the health and behaviour of people, animals and plants. I consider this to be such essential knowledge for everyone that most of the chapter has been reproduced here.

If you wake up groggy every morning, even when you have had enough sleep, or if you, or someone who lives with you, becomes chronically ill and does not respond to treatment, geopathic stress is a very strong possibility.

Geopathic stress is the name given to the harmful effects of unstable or disrupted natural electromagnetic fields emanating from the earth. Extensive research in Europe over the last 80 years has led many experts there to conclude that being exposed to these rays for extended periods of time can weaken one's immune system and increase the risk of cancer and other chronic diseases.

In the process of compiling her authoritative book, Earth Radiation , Käthe Bachler dowsed over 11,000 beds in over 3000 homes in 14 countries, and presents very convincing evidence to this effect. Similarly, Dr Hager of the Scientific Association of Medical Doctors conducted a huge survey of the houses of 5348 people who had died of cancer in the town of Stettin in Poland and established that strong earth rays crossed their homes in all cases. Myalgic encephalomyeltis (ME), multiple sclerosis, arthritis, chronic depression, suicide, cot deaths, high blood pressure and many other serious ailments have also been linked to geopathic stress.

Such a huge body of evidence has been built up in Germany, Austria and France that many medical doctors now routinely do dowsing themselves or enlist the help of qualified dowsers to test that their patients' beds are safely positioned, and some Austrian authorities insist that plots of land are dowsed for harmful earth rays before they will give planning permission for certain kinds of buildings to be erected.

There are several different types of earth rays. Some are global grids with names such as the Hartmann net (which runs in the same directions as our lines of latitude and longitude) and the Curry grid (intersecting diagonal lines running north-east/south-west and south-east/north-west), and harmful effects can occur at intersection points on these grids. Distortions of earth energies due to the movement of underground water streams can also cause problems, especially at points where two underground streams cross at different levels.

It is important to understand that these rays are not "bad". They are simply harmful to humans. Other life forms thrive on them, as I will explain later.

Schumann waves are earth rays that promote good health and NASA (North American Space Agency) has had to create machines to simulate these waves in space capsules because humans cannot survive without them. Unfortunately, Schumann waves are inhibited by modern building materials such as concrete, which presents a problem in urban areas and especially in high rise blocks. Healthy people can normally handle this, but sick people or those under a lot of stress may benefit from using a Schumann wave simulator themselves.

How to know if your home has geopathic stress

The easiest way to test for geopathic stress is to employ the services of a professional dowser. Since some dowsers are more accurate than others, I usually recommend that people have their homes checked by three dowsers independently and only act on the information that they all agree on.

You can also learn to dowse yourself by reading Chapter 12 of Samuel Sagan's book Awakening The Third Eye.

How you sleep in your bed

Apart from dowsing, simple things such as the way people sleep in their beds may give clues to the presence of geopathic stress. In one client's house I discovered through dowsing that both the mother and teenage son had earth rays crossing lengthways through their beds. In the mother's case, the ray neatly dissected her king-size bed in two, and she confirmed that although she had slept alone ever since she had had the bed in that position, she never ever wanted to sleep in the middle of the bed. In the case of the son, he too admitted that he only ever slept on one side of his bed, which turned out to be the side that was free from geopathic stress.

People who are sensitive intuitively move away from geopathically stressed areas in their sleep. Time and time again I have had this confirmed by parents who find their baby or young child scrunched up at one end or one side of the bed every morning. They are trying to escape from harmful earth rays crossing through a section of the bed. Parents need to take note of this and immediately move the bed. Other clues are if the child frequently has nightmares, wakes up crying in the night or wets their bed. There may be other causes involved, but geopathic stress should be investigated.

If you have a cat or a dog as a pet, they can often give clues as to where harmful rays are situated. Cats adore the energy and thrive on it, whereas dogs have a total aversion to it. If your cat loves sleeping in a certain spot, that is somewhere for you to avoid spending long periods of time. This does not necessarily mean, however, that if your cat loves sleeping on your bed that there must be geopathic stress in that area because domesticated cats sometimes choose warmth, comfort and closeness to their owner above the delights of lying on earth rays. However, if you move your bed and the cat still goes to the same position to sleep, you were almost certainly sleeping in a 'bad' location. This, incidentally, explains why pets sometimes will not sleep in their baskets. If your cat or dog won't sleep in the spot you have placed their bedding, try moving it until you find a place where they will settle.

Bacteria, viruses and parasites thrive on earth rays. They naturally congregate there and rapidly multiply. Ants, termites, bees and wasps always prefer to site their nests at points where harmful earth rays cross.

Chickens, ducks and most birds, on the other hand, do not like to be near earth rays and will usually become ill or even die. This gives new insight into the old saying that it is lucky to have a stork nest in your roof.

One client I visited had bought a bird and hung its cage in a corner of her sitting room. It soon died, cause unknown and so she replaced it. That one died too, and the next one. At this point she gave up on the idea of having a bird in the house. She told me this after I had dowsed the area and found harmful earth energies radiating up into that particular corner of the room. If she had only placed the cage a short distance away, the birds need not have died.

If you are fortunate enough to be able to build your own home, one way to check that key positions will be clear of geopathic stress is to use an old Bavarian technique. Place an ant-heap there. If the ants stay put, do not build; if they move away, you're OK.

Never build a home at a place where lightning has struck. This is because lightning always strikes where two subterranean streams cross at a substantial difference in depth. An old oak tree is not a good tree to shelter under in a thunderstorm because they thrive at the crossing points of underground streams and are frequently struck by lightning.

Some trees do not thrive in geopathically stressed areas and will either contort unnaturally in an attempt to grow away or will develop cancerous growths and die. Fruit trees may blossom but never produce fruit. Cut flowers, when placed in areas that are geopathically stressed, will last only half as long as they normally would. Mechanical equipment placed over harmful earth rays frequently breaks down and light bulbs repeatedly blow.

The best remedy for geopathic stress is to arrange your furniture so that your bed, desk, favourite armchair, etc, are all in geopathically stress-free positions. Avoidance is always the best policy.

These quick-fix techniques are also not a permanent solution. Just as one session of acupuncture on the human body does not magically cure all ills for evermore, so earth acupuncture is not a magical cure-all either. It may seem to work for a while but needs regular checking and re-doing. I would certainly never trust my own health or the health of my loved ones to this technique, and I have seen the lives and health of many people suffer greatly as a result of placing their trust in practitioners of this method.

I repeat: Avoidance of earth lines is always the best policy. And if the design of your home makes this impossible, do the best you can in the situation you have, and find a way to move to a new home as soon as you possibly can.

Please note: Since moving back to the UK I have worked with many clients who have taken consulted with Rolf Gordon of the Dulwich Health Society, who I mentioned in my book. I am sorry to say that however well-meaning he may be, I have been shocked by the inaccuracy of his method of distant dowsing and the advice he has given to people. I therefore can no longer recommend his services or the gadgets he sells.

More about geopathic stress
Information about having a healthy home consultation

This site uses cookies to improve the browsing experience of all visitors.
Accept