It’s a curious fact that people who have a lot of clutter tend to use more words to express themselves. So can reducing word clutter help you to live clutter-free? 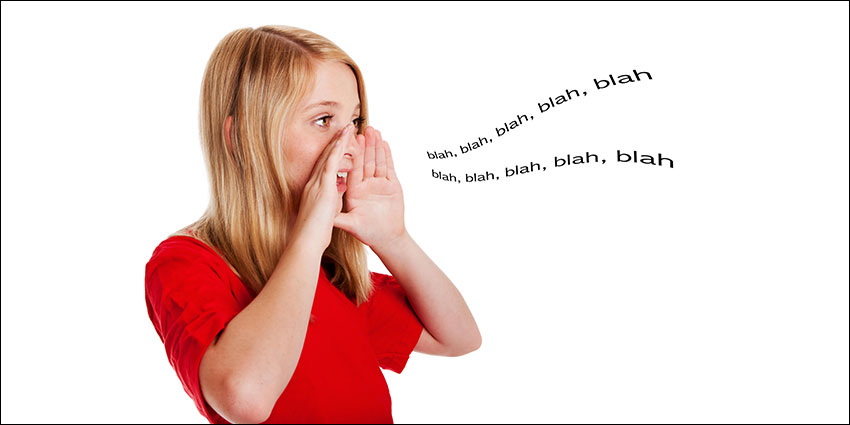 I once worked with a space clearing trainee who was struggling to achieve the standard required for professional certification. She would send me case study reports that were more than twice as long as those of other trainees and twice as convoluted too.

So I did something unusual. I asked her to rewrite her most recent case study report using half the number of words. For a few days, there was no response. Just a stunned silence. Then her revised case study arrived and I was amazed at the difference. Not only had she halved her word count. She had also greatly increased her level of clarity.

In this trainee’s case, it turned out she had huge amounts of clutter at home (this was in the days before professional space clearing trainees took my clutter clearing practitioner training first). She never did get certified as a space clearing practitioner but she told me that learning how to cut the unnecessary babble from her written words greatly helped her to at least declutter her house. It allowed her to see more clearly what was essential to her life and what it was time to let go of.

The value of decluttering your words

I was fortunate to have a high school English teacher who was a kindly soul and a stickler for good grammar.

I certainly didn’t appreciate it at the time but now realize that she taught me one of the most useful skills of my life, which was the art of précis. She would give the class a 600-word passage and ask us to rewrite it in 200 words or less, retaining the essence and discarding any non-essential text. And when she was in the mood, she would push it even further and ask us to reduce it again to a succinct 100 words.

At the tender age of 11, I considered this to be a form of mental cruelty and railed against the injustice of such a difficult task. But she was relentless and eventually I mastered it. It’s now a core principle that runs through the way I write, the way I talk and the way I live. It’s an essential skill for living a clutter-free life.

The connection between word clutter and other types of clutter

I have often noticed a correlation between how much clutter someone has and how much they talk. People who live clutter-free usually speak concisely and get quickly to the point. People who have a lot of clutter are very likely to use more words and also tend to get distracted and stray off the point.

The same thing happens at the mental level too. It is much easier to think clearly in a clear space, and conversely, creating clear space around you promotes clearer thinking.

So if you declutter your home, you will naturally start to need fewer words to express yourself. And conversely, if you declutter your words, you will find it easier to let go of other types of clutter in your life too, such as too much stuff in your home, meaningless ways you keep yourself busy, people in your life who waste your time, and so on. There’s a natural connection.

Like other forms of clutter, word clutter is not the real problem. It is only ever a symptom of an underlying issue.

We are all born incontinent and gradually learn how to control the sphincter muscles of our bladder and anus so that we can control when we pee and poo. But what many people don’t know is that we also have two major energetic sphincters that we need to learn how to operate. One is located just above the head and the other is just below the torso. They can function independently but are designed to work together.

Talking too much is often a sign of weak sphincter control above the head, which is why some people sound like a gushing tap that can’t be turned off. I’ve often speculated that excessive leakage of this kind may in fact be the true cause of some forms of ADHD. It’s certainly interesting to note that ADHD children are often described as having verbal diarrhoea and are prone to physical bladder or bowel incontinence too.

How to reduce word clutter

The most effective remedy I know for verbal incontinence is meditation — the kind that teaches you to still the mind to the extent that all mental chatter ceases. It’s not an easy skill to master but will tone the energetic sphincter above your head in a way that no other practice ever can.

And it seems that even basic mindfulness techniques may help too. Mindfulness is about observing and focusing the mind rather than emptying it, so it is much easier to do than traditional meditation. Recent initiatives to teach this to inattentive children have proven to be far more successful than giving them detention. Schools in the US, UK and Australia have reported an increase in good behaviour by previously unruly pupils as well as a decrease in suspensions and improved test scores.

And if meditation or mindfulness are not your thing, here are three simple methods that can also help to reduce word clutter:

There are many ways you can practice this. Here are three examples to get you started…

Thomas Jefferson summed it up beautifully when he said, ‘The most valuable of all talents is that of never using two words when one will do’.

5 Responses to The surprising benefits of reducing word clutter