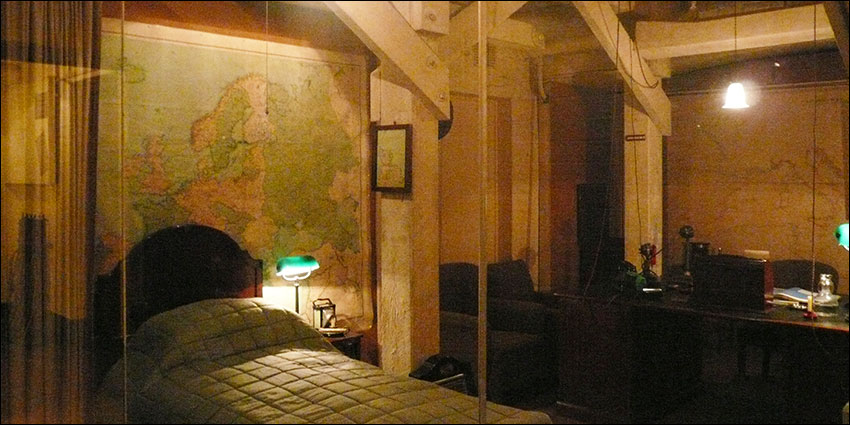 I was in London a few days ago with a couple of hours to spare so I took the opportunity to pay a visit to the Churchill War Rooms.

This is a maze of underground rooms built near No. 10 Downing Street, from where Winston Churchill conducted the war when bombing raids made it unsafe to continue working above ground. Built in utmost secrecy, it was in continuous use, day and night, from 1940 to 1945 and, apart from a few wax dummies that have been added to populate it a little, it’s been preserved exactly as it was since that time.

Visiting historic places is always interesting for me. I was hoping to be able to energy sense the beds, chairs and desks, but there was no direct access to most of the rooms (they can only be viewed through glass walls). However the way the place has been preserved is so faithful to the way it was, and the thick basement walls are so densely imprinted with the intensity of work that was put into the war effort there, that this really wasn’t necessary. Just being there was like being transported back in time.

As museums go, it’s very well done, with plenty of insightful anecdotes you can read, listen to or watch from people who worked with Churchill at the time. Of these the story I like the most is one told by Patrick Kinna, a man with an impressive 150 words per minute shorthand speed and 90 wpm typing, who was Winston’s Private Secretary during the Second World War. He recounts on video that Churchill would give dictation every day before he got dressed, often pacing up and down the room as he spoke. On one occasion, while staying at The White House in America, his bath towel slipped off, but he paid no heed and kept on dictating. His secretary was used to this and carried on regardless. But some time later there was a knock at the door, to which Churchill (who had forgotten he was naked and disliked interruptions) rather brusquely shouted, “Come”. And in came President Roosevelt in his wheelchair. “As you can see, Mr President,” said Churchill, without missing a beat, “I have nothing to hide!”

In another video clip from the same interview, Kenna said he often mused what Hitler would have thought if he could have seen how much of the war was conducted with both Churchill and his secretary in their pyjamas!

The other thing I found particularly of interest was Churchill’s private room which, like many others, had a bed in it as well as a desk. But the bed is located in a ghastly Feng Shui position, directly under the cutting edge of a beam at chest level. This puzzled me somewhat. How could Churchill possibly have led the war in the decisive and forceful manner he did while sleeping in such a disempowering location?

Reading up on it since, I’ve discovered that he hated sleeping in that bed so much that in five years he only used it three times. The rest of the time he would scorn the bombing raids and sleep in his bedroom in the Number 10 Annexe above. And disliking the Annexe to work in, he scorned that precaution too and despite most of his furniture having been moved to the Annexe, he preferred to work and eat at Number 10. Now there’s a man who understood the importance of having the right place to get the job done.

I’ve often observed that powerful people have an innate sense of Feng Shui, even though they’ve never studied or heard of it at all. They have a deep-seated know-how of what works and what doesn’t. In Churchill’s case, he is known to have had an intimate relationship with the buildings he occupied, and he put a lot of time and effort into getting them right. “We shape our buildings; thereafter they shape us,” he once said. How true.