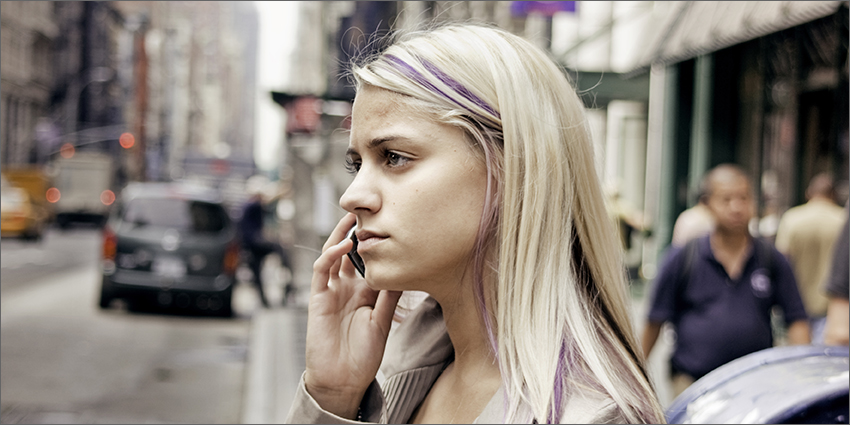 I live in a rural part of England and occasionally travel to London. Arriving on a train this week at Paddington Station, a passenger alighted from the same train as me and started talking loudly to himself in a most emphatic way as he walked along the platform. My first instinct was to give him a wide berth, thinking he must be mentally unstable. But on closer inspection he was well-dressed, clearly in full possession of all his faculties, and talking to one of his employees on a bluetooth headset.

As I continued to walk along the platform, many other people were talking to people who weren’t there via a headset or the old-fashioned way of holding a cellphone to their head. And they all had in common that glassy, faraway way look of someone who was not fully there themselves. No wonder there are so many accidents on account of people talking or texting on cellphones as they walk, cycle or drive.

Hazards of cell phone use

Scientific studies have discovered that more car accidents happen when cellphone speakers are positioned at the back of a car rather than the front, because our attention is then directed backwards rather than in the direction we are driving. And the accident rate increases considerably when a driver physically picks up their phone and holds it to their ear. It’s not just the fact that one hand is no longer available to drive the car. A large part of the problem is that the attention of the driver is elsewhere, focused on the person on the other end of the phone rather than their driving. They are not fully present.

Why cell phones are so compelling

So what is it about cell phones that make them such a “must have” accessory, or for some people, a lifestyle necessity? We’ve all read the reports about the potential health effects of pulsed microwave radiation so close to the head, yet billions of people still take the gamble and use them. I’m probably one of the least active cellphone users you’ll ever meet – some months not at all, and other months maybe once or twice when absolutely urgent and no landline is available. It’s not possible these days to run a business without one. There are some websites you can’t even register on without a cell phone number. Mobile communication is here to stay, in one form or another.

And I’ve figured out why.

What we love about cell phones is that they mimic our natural ability to be telepathic.

I saw this very clearly during the time I lived in Bali, when I witnessed an entire culture adopt cell phones as a way of life. The national telephone communications system in Indonesia is so beset with corruption that much of the money ear-marked for installing land lines had ended up in the back pockets of high-ranking officials, so cell phones became the only method available to most people.

When I first started living there in 1990, the level of telepathy between people was astounding. For example, if you wanted to make an arrangement to meet someone the following week, they would agree and walk away. Only if pressed would they specify the day of the week, and never the exact time (many Balinese don’t possess a watch anyway). The most precise appointment I ever managed to make with a Balinese friend was “next Wednesday morning”, with no further information about the time or location. Yet it usually worked out. Somehow we would run into each other. And I gather this worked even better among the Balinese themselves, who had grown up without any communication devices and knew how to tune into one another from a distance. They all had a highly developed level of telepathy.

Over 20 years, I gradually saw this telepathic ability diminish as the Balinese came to rely more and more on cell phones for communication. Nowadays you would have to venture into remote villages where phone signals don’t yet reach in order to find people who still have this skill. And, of course, many people have watches now and schedule their time according to the clock rather than the position of the sun or the stars in the sky. Precise date and time appointments have become much more commonplace.

In many Balinese temples there are now signs asking people to turn off their cell phones while praying, but the reality is that many don’t. They can’t bear to be out of touch, even for a few minutes. This, and the astralizing effect of the hundreds of phone masts that now cover the island, radiating microwave frequencies 24/7, has caused a greater degradation in the spiritual culture than anything else I’ve seen – more than western junk food, more than western television, and more than the onslaught of materialism. Road rage, as an example, used to be unheard of in Bali, but when phone masts reached a certain density and people become overloaded with the radiation they emit, incidents of road rage began and have continued to climb ever since.

In the West we can’t see the effects so easily in people, since there are too many other factors that have an effect. But we can see it in wildlife. Many studies are pointing to microwave radiation being responsible for the worldwide collapse of bee colonies and the disruption of the biological systems of birds, ants, bats, butterflies, frogs, whales and other creatures. Including humans. Which makes me think that my initial instinct to give people talking on cell phones a wide berth isn’t so far off the mark after all.