Why Dutch stairs are so steep

I flew to The Netherlands yesterday to do a space clearing consultation and, as always, was struck by how flat the country is. But something I had not realized on any of my previous visits is how extraordinarily tall many of their houses are, as if to compensate for the flatness of the terrain. And not only that, but how impossibly steep their staircases are, in a land where hills are almost unknown.

When I say “steep”, I mean so perilously vertical that they would contravene building regulations in most other countries. To safely ascend requires climbing on all fours with the additional help of teeth and fingernails, but this is nothing compared to the precision and trust in almighty forces of benevolence that are required to navigate a descent. The triangular shaped steps in many properties are only wide enough to place your feet sideways, and the slightest loss in concentration can lead to an unforgettable experience of gravitational laws. 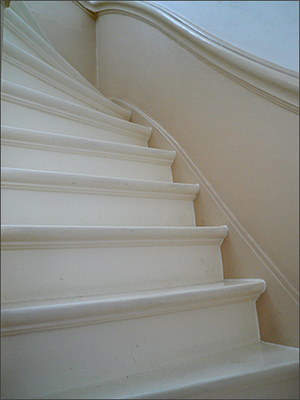 Apparently the reason for these terrifying structures is that most properties in the Netherlands are built on soft sandy soil, requiring massive load-bearing stakes called piles to be driven into the earth to support them. Houses are also usually built in a row, which helps them keep each other upright. Centuries ago, when folk used to do their own construction, some skimped on how deep their piles were sunk, which caused not only their own house to lean but sometimes adjacent buildings too. This led to so many problems that eventually the government took over the installation of piles, and introduced a tax to cover the cost, based on the width of the house that was built. Hence the vast number of narrow, tall, long houses in the Netherlands. They may have reasonable sized rooms but no space at all for a decent staircase.

How this enterprising method of tax avoidance ever caught on in a country that is best known for wearing slip-on wooden shoes, I will never know. These staircases are challenging enough in bare feet, positively suicidal in socks, and almost beyond the bounds of possibility in clogs.

Remarkably, even though this tax was abolished long ago, the Dutch have become so used to their daily death-defying climbs that many modern homes are still built in this style, with special external winches to lift heavy furniture in and out. So well have they mastered stair-climbing arts, in fact, that they are ranked only seventh in the world in stair fall statistics, but I’m told that just about everyone bears the emotional or physical scars of having taken a tumble at some time or other, with senior citizens most at risk, and children under the age of five having the highest rates of head injuries.

So the Dutch most certainly don’t have mountains, but the twists and turns of their architectural history means they are no strangers to vertical ascents. What a curious world we live in.

Karen Kingston is a leading expert in clutter clearing, space clearing, feng shui and healthy homes. Her two international bestselling books have combined sales of over three million copies in 26 languages and have established themselves as "must read" classics in their fields. Her best-known title, Clear Your Clutter with Feng Shui, is now in its fourth edition. She is best known for her perspective-changing insights and practical solutions that enable more conscious navigation of 21st-century living.
This entry was posted in Interesting stuff. Bookmark the permalink.

16 Responses to Why Dutch stairs are so steep