The emotional clutter of a chip on the shoulder 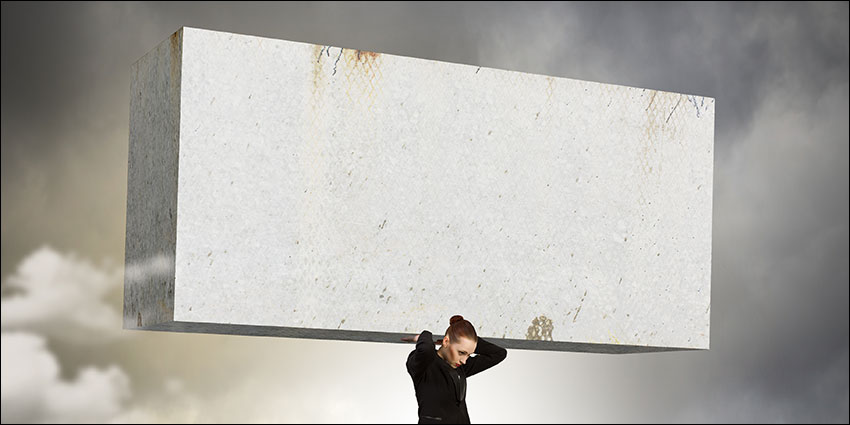 We’ve all met people with a chip on their shoulder. They carry their burdens with them wherever they go, and their energy silently screams, ‘Why me? Why this? Why is my lot so unfair?’ It’s one of the most self-destructive forms of emotional clutter there is.

During the 20 years I lived in Bali, I would go for a walk at 5:30am each morning. It was the coolest time of the day, the sun had just risen, and the world was waking up.

My house was at one end of the village and I would walk to the other end and back, which took about an hour. I would see the same people every day going about their routine tasks, and there are two I remember in particular.

One was a young Balinese boy who went from trash bin to trash bin on his delapidated old bike, collecting discarded cardboard and plastic bottles to sell for a few rupiah. He lived at the opposite end of the village to me and we would usually pass each other somewhere in the middle. He was about 12 years old, tall and thin, and with stooped shoulders that seem to say, ‘I’m not really here. Don’t notice me.’

Most Balinese people in small villages make eye contact with you, give you a broad smile and say hello if you pass them in the street, especially early morning when there are few other people around. But not him. He would always keep his eyes averted and was clearly ashamed of what he did. Someone told me his family desperately needed the money he made to help them all get by, but it was clear he wished he didn’t have to do it. He tried to make himself as invisible as possible.

The other person I saw each morning was an old man who was employed by the village to sweep the pavements. Dressed from head to foot in a regulation gaudy yellow one-piece work suit, he carried a cheap broom made of bamboo spines, a plastic shovel, and a basket he pulled behind him on a string in the same way that a prisoner might haul a ball and chain. Like the young boy, he looked ashamed that his life had come to this and always looked down when I passed.

They both carried their perceived burdens so heavily.

Not one to be put off so easily, I always gave them a cheerful Selamat Pagi (Good Morning in Indonesian) each time we met. It took many months but eventually we reached the stage where they would look up, smile, and reply. Sometimes we would even stop and chat. I coaxed this out of them, like you coax trust out of an animal that’s been hurt too many times. I couldn’t change their lives but for those brief moments each day, I discovered I could get them to drop their load and come out of themselves. For a few brief seconds, at least, their essence shone.

There were usually three or four other people out and about at that early hour of the day hunting through bins for various items, and two other people who swept the streets. The attitude of these people was completely different to the young boy and old man. They just did their job and laughed and joked with friends as they got on with it. The jobs they all did were the same but their emotional engagement was completely different. They had no chips on their shoulders.

What I learned from observing this day after day was that chips truly only exist in the mind of the chip-carrier. They are self-generated.  And worse than that – they are disconnecting. They push other people away and make the person feel isolated, miserable and alone.

Another person I knew at that time was a middle-aged Balinese woman who worked as a masseuse. She had excellent skills but carried a monumental chip on her shoulder about what a hard life she’d had. She’d get you on her massage table, make you feel wonderfully relaxed, and then tell you all her troubles and financial woes while you were her captive audience. She would dump all her emotions on every client she worked with, hoping they would take pity on her and help her out. Sometimes a kind-hearted person would give her a generous tip, but of course they felt uncomfortable and were unlikely to book another session with her again.

I got to know her as a friend and saw this same pattern repeating. Then one day, I sat her down and explained how she was creating her own problems. ‘Tourists visit Bali to relax,’ I said, ‘and they can’t enjoy your massage if you’re telling them all your problems while you do it.’ I showed her that she needed to change her ‘Poor me’ attitude to ‘How much can I give this person, even though my own life may not be all I want it to be?’

She took my advice and soon became the most sought-after masseuse in town. The lack of money she had been moaning about all those years came to a stop when she stopped moaning about it.

These three people, each in their own ways, perpetually lamented their lot in life, which kept them locked in their own circle of misery. Yes, the hardships they faced were real, but they made them harder to bear by the attitude they took. When they were able to step out of this, they shifted into a very different space with very different possibilities. The world had not changed, but their attitude to it and their engagement with it had.

Viktor Frankl, psychiatrist, Auschwitz holocaust survivor and author of Man’s Search for Meaning, knew a lot about the importance of attitude, and his insights were summed up beautifully by Harold S. Kushner, who wrote the preface to the 1992 edition of Frankl’s book:

And Eleanor Roosevelt had a very similar message:

In the long run, we shape our lives, and we shape ourselves. The process never ends until we die. And the choices we make are ultimately our own responsibility.

So, what chips do you carry on your shoulder?

Your chips may not be as obvious as the ones I’ve described in this article, but most people do have chips of some kind — some burdens they feel they have to bear or some ways they feel they are being treated unfairly.

This can take many forms, such as working at a job you wish you didn’t have to do, feeling resentful about doing all the housework or laundry in your home, or feeling frustrated because you don’t have more money, better looks, more enlightenment or any of the other worldy or spiritual qualities you believe you deserve. In short, the chips you carry are anything you approach with a victim mentality, railing openly or secretly against the injustices of what life has dealt you.

The good news is, you can always change this and a very different world will open to you if you do.

The first step is to really understand that it’s not what happens to you but how you handle it that determines your destiny. That’s immediately empowering.

Then take the time to locate any attitudes you have that carry victim, martyr-like or poor-me frequencies and do the personal work to change these. Sometimes just becoming aware of an attitude, seeing why it doesn’t serve you and consciously changing the behaviour is all that’s needed (as with the massage woman). In other cases, deeper levels of emotional work may be required to help you to turn this around, such as working with an IST practitioner or similar type of therapist.

Take a tip from Denis the Menace

There’s a great cartoon that I remember seeing in a comic book when I was a child. It featured the irrepressible boy, Denis the Menace, who had been forced by his teacher to wear a dunce’s cap and sit in the corner. The thought bubble coming out of his head read, ‘I may be sitting down on the outside but I’m standing up on the inside!’