The delights and idiocies of open-plan design 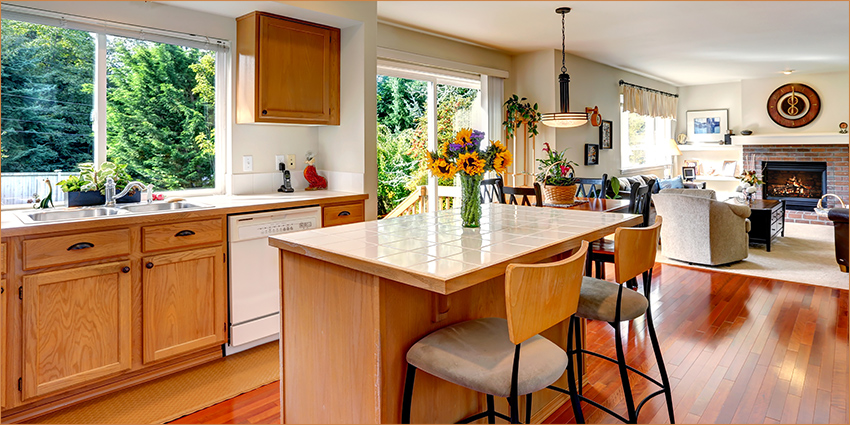 In tropical regions, where people spend most of their time outside, small windows are the norm in traditional homes. Less light equals less heat, and having a cool, dark bedroom is infinitely preferable to one that is hot and light. As one Balinese person I know put it, with typical earthy logic, you don’t need to see anything when you’re asleep.

In colder climates of the world, small windows have long been popular for the opposite reason – not to keep heat out, but to keep it in.

Then along came the miracle of heating and cooling systems, and a flotilla of eager architects who set about exploring the new possibilities this opened up. Air-conditioning and central heating meant windows could be made larger and internal walls could be removed to allow more circulation of light. The era of open-plan living had arrived.

The pros and cons of open-plan design

The immediate advantages, when you walk in to a well-designed open-plan home, are obvious. The living space is wonderfully lighter, brighter, and feels more spacious. Your etheric naturally expands, creating a feeling of freedom from constraints.

It seems very appealing, until you try to live in a home like this, and realize how important walls and doors can be. Noise is one of the biggest problems, echoing up and down staircases and along the corridors. If you live alone, that’s fine, but if you share the space with others, there’s often nowhere you can go to get some peace and quiet.

One multi-million-dollar home I once visited had a massive open-plan living area, dominated by an enormous TV screen that all the children stayed glued to, with the volume on high. The parents saw this as a clever babysitting ploy without realizing they had actually given up control of the space to their kids. A flick of the remote determined the noise that permeated every room of the home. Not surprisingly, the children became unruly and prone to frequent tantrums. The open-plan design meant that they ruled the roost, not the parents, and they took full advantage of this.

I’ve found noise pollution to be a factor in nearly all the open-plan homes I’ve ever seen, and this is greatly exacerbated if the floors are tiled or made of wood rather than carpeted, and if the windows have blinds rather than curtains.

Another issue is how little storage space there usually is. The absence of internal walls means there’s nowhere to put up cabinets to store the things you need in daily life. The space either becomes cluttered, or stuff has to be stashed in other parts of the home, far from where it’s needed.

Cooking smells can be a problem too, permeating a much larger area than the kitchen and lingering longer. Soft furnishings, such as sofas, readily absorb and hold odours, and cannot easily be cleaned. They are not designed to be placed in kitchen environments.

Then there’s the inefficiency and expense of heating or cooling such a large space. Perhaps you only want to use your lounge, but you have to moderate the temperature of your kitchen and dining area too, because they are all one.

Open-plan living can also make it very difficult to create a heart to your home, especially if your kitchen-dining-living area feels like a through-corridor to other parts of the property. People and energies have no place where they can comfortably gather.

How the design of your home can affect you

‘We shape our buildings and afterwards our buildings shape us,’ said Winston Churchill, in his famous speech where he advocated retaining the rectangular shape of the House of Commons Chamber instead of rebuilding it in a semi-circular or horseshoe shape, as some had proposed. He felt very strongly that the existing shape best served the purposes of England’s two-party democracy, and persuaded his fellow parliamentarians to agree. That design remains to this day.

The layout of modern homes has changed considerably, however, and open-plan living is one of the most prevalent of all. As the trend for this continues to spread around the world, its influence on the quality of modern life has been significant.

What architects have not taken into account is that the natural state of the human is involution (turning inwards), which is the pathway to accessing inner silence, vast states of consciousness, and a more purposeful life. But twenty-first century living is increasingly exvoluted (turned outwards), and because of this, more and more spiritually disconnected and lacking meaning.

Open-plan living is designed to be more sociable but can also have the effect of causing the occupants of a home to be perpetually exvoluted. The lack of quiet, privacy and boundaries can take a serious toll and needs to be counterbalanced by having other areas of the home where these essential aspects can be enjoyed.

Why broken plan is the new open plan

In the UK, some architects are now helping clients to change from open plan to what is being called “broken plan”. This usually doesn’t go as far as constructing floor-to-ceiling internal walls but does the next best thing by creating half walls, folding partitions, or false walls using cleverly positioned items of furniture. Remedies can also include putting doors on entrances to corridors to reduce noise flow, adding soft furnishings and rugs to absorb sound, and attaching acoustic-absorbent panels to the walls or ceiling. As a last resort, some have turned to building an office shed or summer-house in the garden as a way to get some personal space, and sales of these structures are currently soaring.

It would be remiss of me to end this article without at least mentioning the hopefully short-lived new trend for open-plan bedrooms with no dividing wall or door between the sleeping space and bathroom. In some cases, the bathtub is right next to the bed, the toilet is in plain view, and there is a walk-in wardrobe without a door, causing clothes to become damp with bathroom moisture.

I remember being excited the first time Richard and I stayed in a hotel that had a splendid copper bathtub in the bedroom. But the novelty soon wore off when we discovered how the humidity lingered in the air for hours, how the wet carpet around the tub had a terrible dead dog smell, and how the toilet being so near to the bed felt unhealthy, unsanitary, and plain wrong. Open-plan of any kind creates challenges, but this is taking it a step too far.

4 Responses to The delights and idiocies of open-plan design