The deeper implications of putting your stuff in storage 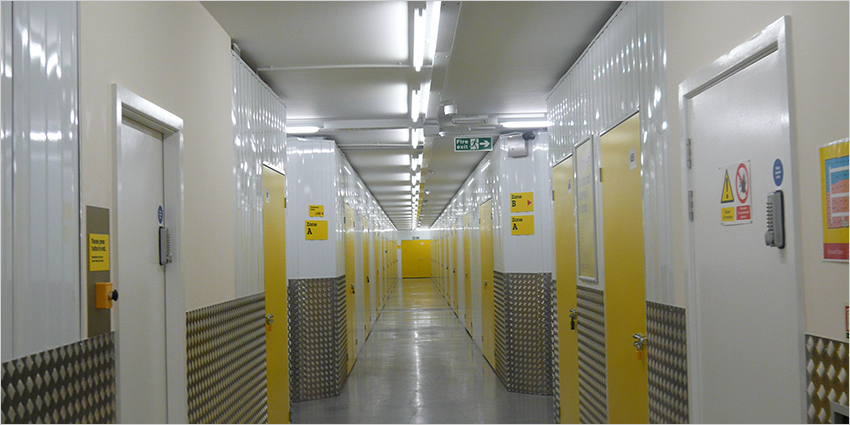 Self storage facilities are eerie places. Some owners try to make them more cheerful by painting the doors bright colours or playing piped music through the corridors, but there’s no getting away from the lifeless energy of tons of stagnant stuff.

Mostly what’s stored is innocuous, but sometimes it’s not. The manager of a storage unit in the US told me about a man who kept his wife’s dead body in a barrel in a storage locker until the smell gave him away.There was another story I read about in Australia of a dead body discovered in a self-storage unit, hidden there by a woman who’d topped her husband. They found out because she forgot to pay the rent, so they broke open the door to repossess.

Thankfully these instances are rare, but if you google “dead body found in storage unit”, you’ll find quite a few more cases.

So apart from occasionally storing dark secrets, what else are these places good for?

I’ve used a storage unit three times in my life.

The first time was when I was living six months a year in the UK and six months in Bali. I had a locker in the UK and what can best be described as a fairly secure cupboard in Bali. Because my life in each culture was so different, I really didn’t miss anything I had in one country when I was in the other. But I must say everything got a lot easier when I moved permanently to Bali and let go of my things in the UK. This was in 1995. I wrote my first bestselling book that year, and another the year after. A whole new era of my life began.

The next time wasn’t so clear-cut. After 20 years in Bali, I sold up everything I owned and moved back to the West. First stop was California, where my husband and I thought we wanted to live. So we left our suitcases in a storage unit there while we flew to Europe for a couple of weeks to sort some things out. Not the best decision, as it turned out, because we soon realized that we really wanted to live in the UK. So there we were, living on one continent with our most useful stuff stranded on another, and no need to visit the US for any other reason for six months. Hmmm…

The problem with being in one place while your stuff is in another is that you’re neither here nor there. You’re energetically stretched between the two locations. You can’t fully land or get on with your life where you are because part of your consciousness is resting somewhere else. It can be very destabilizing.

Many times we wanted to just get on a plane and bring our bags over to the UK. But we were moving from one short-term holiday home to another so didn’t have any permanent place to put it. In the end it was several months before we found a home to rent long-term and were reunited with our stuff. If you’re ever in this situation, resolve it as quickly as you can. Your life will be on hold until you do.

The next time we rented a storage unit was when we moved to a rented house in the UK for a year until we found a place to buy. The house was too small for all our furniture so we put half of it in storage. We could have saved ourselves some money and put it in our attic or garage, but I’ve written blogs about why that’s never a good idea so we didn’t want to do it ourselves.

So do I recommend using storage units?

Well, yes, but only as a temporary solution. If you know exactly what you’re storing and use the stuff sometimes, or will have a use for it in the not-too-distant future, it’s fine for a while. The problems start when you leave things in storage for too long a period, or worse still, indefinitely. You’re connected energetically to everything you own, so this is like leaving part of yourself in limbo. If a whole year goes by, alarm bells should ring. Quite apart from the financial cost, there’s the toll it takes on your well-being.

The bottom line is, can you truly get on with life when you have stuff in storage? And the answer, I’m sorry to say, is no. Some part of you will be disconnected, neglected, unconscious or just plain waiting until you and your stuff are united in one place. This puts an interesting new slant on that well-known phrase “getting yourself together”.