The art of owning possessions is to have what you need to live life to the full, but not so much that it becomes a burden that holds you back. 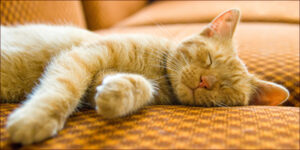 I once witnessed a very poignant moment during a clutter clearing consultation when the woman I was working with took a much-needed break from sorting through her mounds of stuff. Her gaze caught upon her cat, sprawled out asleep as only cats can sprawl, with not a care in the world.

‘My cat owns nothing at all,’ she mused, ‘and look how peacefully she sleeps.’

She looked at the piles of clutter she still needed to sort through and saw how different her life was to the life of her cat, who has no possessions and never will have.

Our relationship to possessions

Humans are markedly different to other species in the relationship they have with possessions. Some animals such as squirrels collect stashes of food, but the concept of personal possessions is believed to be unique to humans. In children brought up in the West, it’s usually apparent by about the age of 12 months, when attachment to special objects such as toys or blankets can develop, and by the age of 21 months, the word “mine” starts to appear in a child’s vocabulary.

Fast forward to adult life, and up to five percent of westerners now have a problem with hoarding. That’s one in every twenty people who identify so strongly with the items they own that they don’t want to let them go. It’s becoming a huge problem and one that most social workers are not equipped to deal with.

I’ve worked with hoarders, and it’s a long, slow process that requires immense patience. It’s wonderful that there are some professionals who are dedicated to working with people whose clutter has reached such debilitating levels but I made the decision some time ago that I can make the greatest contribution by helping the other 95% of the population not to get to that stage. Once full-blown hoarding has set in, it’s very difficult to change.

And what’s one of the most important things I teach people? It’s how to change their standpoint, so that they see their stuff for what it truly is – just stuff. George Carlin captures this perspective so beautifully in his classic sketch about the importance of stuff.

2 Responses to It’s all just stuff