Do you often plan to go bed at a certain time but end up staying up way too late binge-watching TV, surfing the internet, or checking social media or texts? 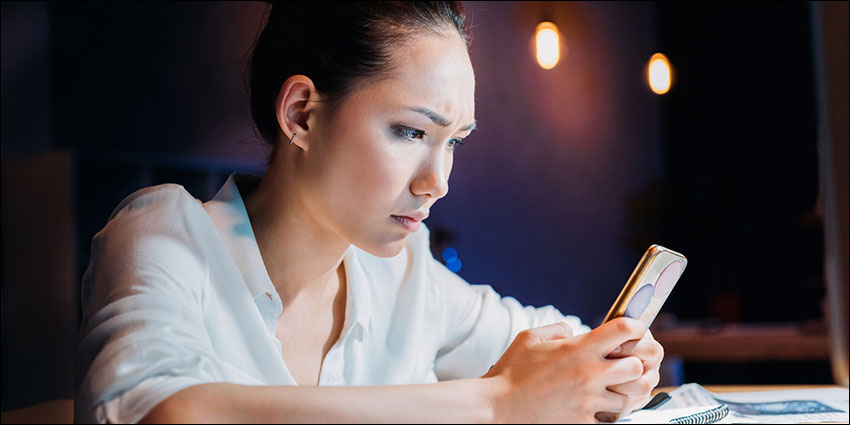 Does this bleary-eyed photo look like you most nights a week? If so, you probably have Sleep Procrastination Syndrome which, thanks to modern technology, now afflicts millions of people around the world. You know you’ll be tired the next day but somehow you don’t care. Until your alarm goes off the next morning, that is, and then you wish you’d gone to bed earlier.

‘I’m a night owl’, you may say in your defence. Scientists have discovered there really are some people with a genetic sleep disorder known as Delayed Sleep Phase Syndrome, whose circadian rhythms make them want to stay up later at night. But this affects at most only 15 percent of humanity. For everyone else, habitually staying up late is called Sleep Procrastination Syndrome, and it’s especially common in people with an addiction to screens. It’s a potent form of self-sabotage that has far-reaching effects.

Why sleep procrastination is bad for you

A study titled The metabolic consequences of sleep deprivation conducted by Kristen Knutson of the University of Chicago found that people who habitually stay up later than planned have higher rates of diabetes, mental health disorders and neurological conditions.

In my own work with clients, I have found there is virtually nothing I can do to help anyone to bring about lasting changes in their life unless they are first able to put the foundations of a healthy sleep cycle in place. Staying up late and waking up tired every day disrupts everything. If you habitually hit the snooze button on your alarm each day, it may seem normal, but it’s not. It means you’re running on empty. And even if you have the luxury of not needing to get up for anything in particular each morning, it will still affect you.

If you’re in good health, your body can cope with the occasional late night. That’s not what we’re talking about here. It’s when you stay up late night after night, going to bed exhausted and waking up tired for no good reason, that it starts to have consequences. Running on empty fatigues your adrenals and uses up a precious commodity that is known in Chinese medicine as jing.

Why jing is so important

Jing is the quintessence of creative energy. It is what determines the level of our vitality, stamina and libido. Unlike the chi energy that comes from the food we eat, which can be replenished each day, jing is inherited from our parents and cannot be replaced when it runs out. Our reservoir of jing becomes depleted and exhausted as we age. It’s an inescapable fact of life.

Some activities burn more jing than others. In men, it is lost each time they ejaculate semen, which is why Taoists and Tantric practitioners have developed sexual practices that avoid this. In women, jing is lost (to a lesser extent than ejaculation) through menstruation.

Some lifestyle choices can also contribute to this. Extreme physical sports, drinking alcohol, overworking and overeating will burn jing at a quicker rate. And when you stay up late doing mindless stuff, especially when you are so tired you can hardly keep your eyes open, you have to draw on reserves of energy to do that. It comes from your store of jing.

In other words, each time you engage in sleep procrastination you are prematurely aging yourself. If you doubt me, look at yourself in the mirror at the end of one of those sessions, just before you finally drag yourself to bed. The person looking back at you will look far older and wearier than your years.

The cause of Sleep Procrastination Syndrome is usually it’s a mixture of poor time management, internet addiction and FOMO (Fear of Missing Out).

There’s also a type known as Revenge Bedtime Procrastination that’s based in reactance against authority of some kind. A person can spend their entire life unsconsciously taking revenge in this way for having been sent to bed early as a child or some other perceived injustice. This can continue regardless of whether they still live with their parents or if their parents are even still alive. It’s a futile rebellion that hurts only themselves.

How to overcome sleep procrastination

Changing sleep procrastination behaviour is not as easy as you might think. Exhausting yourself each night provides a handy excuse for any failures in life. ‘It wasn’t my fault’, you can tell yourself. ‘I was just tired.’ But you’re kidding yourself because you know full well it was your own decision to stay up too late.

Then there’s the problem that you may have been sleep deprived for so long that you no longer know what normal feels like. That can take some getting used to.

So the first step to overcoming this is that you must want to do it. It won’t work to force yourself or ask someone else to police you. You have to experience how much better you feel when you get a good night’s sleep and want to have more of that in your life.

How to retrain yourself in three simple steps

You may be happy to know there’s one exception to the no-screens rule. Ereader screens that use e-ink technology don’t emit blue light, so it’s fine to round off your day by reading an ebook on one of these. But do set yourself a time limit so that reading “just one more chapter” doesn’t become another way of staying up later than you intend.

Related articles
Do you use social media or does it use you?
How WiFi can affect your sleep