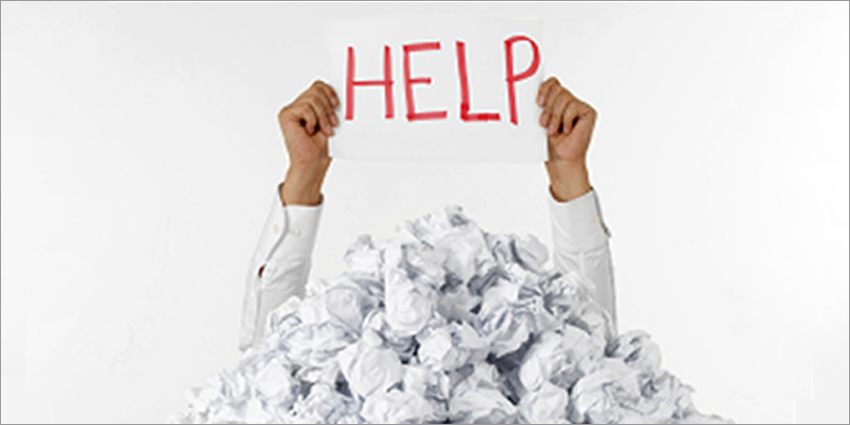 In every clutter clearing course I’ve ever taught, paper always comes up as one of the most challenging types of clutter there is. But in the same way that Jeremy Clarkson maintains that it is not speed that kills but suddenly coming to a stop, so I maintain that it’s not paper that’s the problem at all – it’s all the writing or printing on it that causes so much work!

OK, some of you reading this may have a hoard of empty notebooks you’ve acquired for future use, but with that one exception, which can be easily dealt with (don’t buy any more until you’ve used all the ones you have!), it’s not the paper but the content that’s the issue.

The first evidence of humans expressing concepts in symbols has been found on clay tablets from 6000 years ago. It moved to a new level of sophistication with the invention of paper in China 2000 years ago, and then went through various stages of evolution to reach the situation we have today where most people in the western world can read and write, and there are reading and writing materials in every home, not to mention computers churning out copious quantities of documents on printers.

Historically, Finland has had the highest per capita consumption of paper in the world, but according to a report published in The Economist in 2012, it has now been overtaken by Belgium, apparently because of the huge quantity of documentation being produced by European bureaucracies based in Brussels. Austria, Germany, Japan, and Sweden are the next highest consumers, followed by the US, where paper consumption equates to almost six 40-foot (12-metre) high trees per person per year. Admittedly this statistic includes all kinds of paper such as packaging, toilet paper, tissues, books, and magazines, not just the paper documents that arrive on our desks. Still, six entire trees worth of paper per person per year is one heck of a lot, and a sobering thought.

So this may entice you to make efforts to use less paper in future. But what can you do about all the paper that is already in your life and needs your attention in some way?

In response to many requests for help, I’ve created an online course called Clear Your Paper & Digital Clutter, which runs for 30 days, with a new step being posted every three days. How much time you invest in each step will depend on how much paper clutter you have and how keen you are to conquer it, but tackling your paper mountain with my tried and tested methods and the camaraderie and support of a like-minded group makes the whole experience so much easier, more effective, and more fun.

The course is conducted on a private online message board that you can visit any time of the day or night to read the latest posts. It will cover all forms of paper clutter, including books, newspapers, magazines, clippings, photos, and documents, as well as the electronic equivalent of paper clutter such as emails and digital photos.

Karen Kingston is a leading expert in clutter clearing, space clearing, feng shui and healthy homes. Her two international bestselling books have combined sales of over three million copies in 26 languages and have established themselves as "must read" classics in their fields. Her best-known title, Clear Your Clutter with Feng Shui, is now in its fourth edition. She is best known for her perspective-changing insights and practical solutions that enable more conscious navigation of 21st-century living.
This entry was posted in Clutter clearing, Events. Bookmark the permalink.