Why we never tell anyone to throw anything away

Telling people to throw things away is a misguided approach to clutter clearing. Some lessons I learned in Bali reveal there’s a much better way to help people than that. 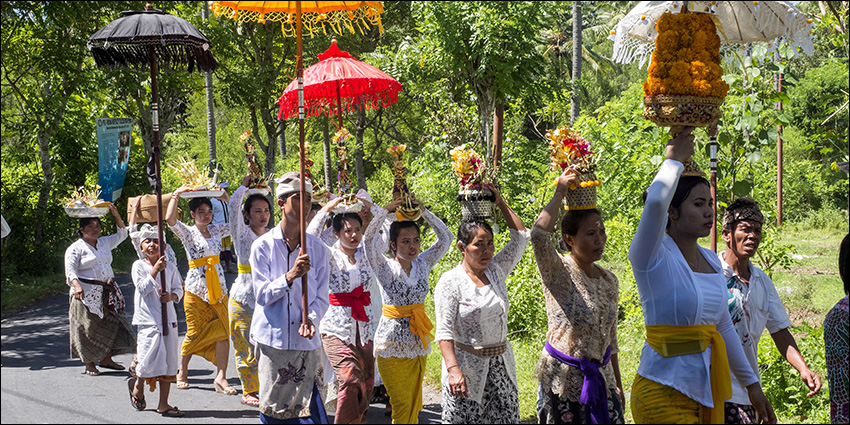 One of my favourite Balinese temples, deep in the tropical jungle, is a six-hour roundtrip from the nearest tourist enclave. When I lived in Bali, I would often visit this temple and if ever I needed a pee while I was there, I would go native. The rule on the approach road to the temple was women to the left and men to the right. At times of high ceremony, this might mean thousands of people using the jungle toilet each day. Providing you watched out for snakes, the arrangement worked very well. Everyone used the areas very considerately and no litter was ever left.

It was here that I learned to pee standing up, like all Balinese women do in the open air when wearing a sarong. ‘What on earth are you doing?’ I was asked the first time I tried to pee crouching down like a Westerner, as if it was the most demeaning thing in the world. Peeing standing up is something of an art, it’s true, but it’s easily learned and very empowering.

This held me in very good stead when I visited the family home of the Balinese man I was married to for 12 of the 20 years I lived in Bali. He was the youngest of 13 children and his family was desperately poor. The floors of his home were made of beaten earth and space was at such a premium that his parents slept on the kitchen floor. There was no toilet, so whenever I stayed there I used the area among the banana trees like everyone else and bathed with them in a nearby sparkling fresh mountain stream.

In the dry season, this system worked fine. It became more challenging during the tropical downpours of the wet season, which last for half of each year. So on one of my visits to the family home I announced my intention to pay to install a squat toilet, complete with a septic tank, for them all to use.

They received the news well and I thought that was that. But, after discussing it among themselves, they came to me the next day and explained very politely that if I wanted to give them a gift, they would much rather have a TV. They had lived without a toilet all their lives and didn’t much care whether they had one or not. Being the only home in the village to have a TV would really be something else.

Well, I bought them a TV and they loved it. And the next year I put in a toilet too. For the first few years, I suspect the only person who ever used it was me. In time, most people in the village followed suit and installed a toilet. Those who could bought a TV too.

I learned two valuable lessons from this. The first is that what you think people need may not be at all what they want for themselves. That’s where many do-gooders go wrong.

The second lesson I learned is that what people think they need is often not what they really need at all. It’s what their lower wantings want rather than what will truly benefit them the most.

Some years later, the Balinese government ran a campaign to educate villagers about sanitation and after the family realized that their jungle toilet was the reason so many of them got sick in the wet season, they appreciated having a toilet and started to use it. It’s become normal behaviour in the village now and even my favourite temple built a block of toilets for visitors to use.

How this applies to clutter clearing

When it comes to clutter clearing, the same lessons apply. Richard and I have a firm principle that we never tell anyone to throw anything away. People have their own reasons why they feel the need to hang on to things. Interfering with that never helps.

What does work miracles, however, is opening a space for a person to see their clutter from a different perspective so that they can see how it is holding them back. Best of all is when someone has an “aha!” moment about it. Like a light being shone into a dark area, they see the clutter item for what it is, understand why they acquired it and see why they no longer need it. This usually makes them far more willing – or even excited – to let it go.

This is what we specialize in doing in the books and blogs I write, the online courses I teach and the online sessions Richard conducts. The theme that runs through everything we do is opening spaces for people to see their situation from a higher standpoint than they are generally able to access themselves and make their own decisions there. For those of you who are familiar with the online course I teach called The Seven Levels of Consciousness, we help people to make decisions from Level 5 or Level 4 spaces instead of being stuck in the repetitive quagmire of Level 6.