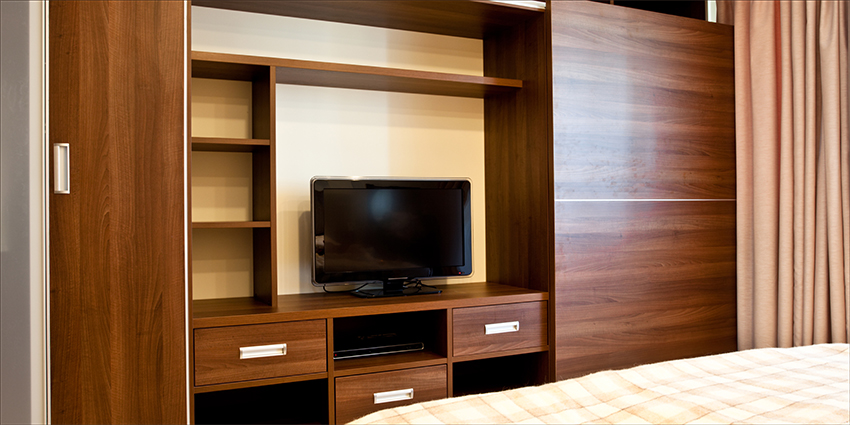 I once stayed in an English hotel with my husband, Richard. We went to bed feeling fine and woke up feeling terrible.

At first we thought we’d both come down with flu. We had dry throats, stuffed up noses, stinging eyes, difficulty waking up, and generally flu-like symptoms. We’ve both experienced similar feelings before when sleeping in hotel rooms with air conditioning, whether it’s turned on or not. The chemicals remain in the air for many days after air conditioning has been operated. But in this room there was no air conditioning and there never had been.

We were puzzled for a while until we took a good look around us in the clear light of day and realised the room was full of brand new fibreboard furniture. All the cabinets, an enormous headboard, and the bedside tables were all made of the same trendy-looking material, which usually outgasses for many years after manufacture. Even though we had slept with the window open, there was not enough air circulation to prevent us from breathing in a toxic cocktail of chemicals all night long.

A lot of modern furniture is made from fibreboard — also known as particle board, MDF (medium-density fibreboard), or hardboard. It is made from wood chips or sawmill shavings and is held together by a formaldehyde-based adhesive, notably urea-formaldehyde (UF) or phenol-formaldehyde (PF), which you may recognise as that “new furniture” smell. PF outgases less than UF, but is more expensive so is usually not the first choice of manufacturers. Wall panels made of plywood (thin sheets of wood) are also glued together using this type of adhesive.

Outgassing (also known as offgassing) is the slow release of the gas that is trapped, frozen, absorbed or adsorbed in a material. Formaldehyde’s health effects include eye, nose, and throat irritation, which can be accompanied by coughing or breathing problems. Prolonged or high exposure can lead to asthma, severe headaches, nausea, vomiting, nose-bleeds, skin rashes and other allergic reactions. According to the US Environmental Protection Agency, ‘there is evidence that some people can develop a sensitivity to formaldehyde. It has also been shown to cause cancer in animals and may cause cancer in humans.’ The way to test for formaldehyde allergy is with a patch test. It’s also possible to test concentrations in buildings using a monitor.

Experts vary on how long it actually takes modern furniture to outgas, with estimates ranging from a few months to a few years. The Healthy House Institute says it can take 6-10 years. The length of time is also influenced by the type of glue used, the age of the wood, the amount of ventilation, and the temperature and humidity of the room (it takes longer in cold climates).

But however long it takes, whenever we are house hunting, we don’t even bother viewing places that have just been renovated or redecorated unless the owner specifically stated that non-toxic building materials and paints have been used, which is very rare. And when booking to stay in a hotel, we do our best to avoid the ones that proclaim themselves as “newly refurbished”.

After checking with the management, we discovered that this particular hotel room had been completely refitted just a few months earlier. If we’d known that, we wouldn’t have booked to stay there.

So what can you do about outgassing in your home?

Well, the first thing you can do is to make a point of checking the formaldehyde content of any new furniture before you buy it. Some types have far less than others, such as those labelled U.L.E.F (ultra-low-emitting formaldehyde) or better still, N.A.F (no added formaldehyde). Or buy solid wooden furniture made from real trees from a renewable source, which will not outgas at all.

Another option is to buy second-hand furniture that someone else has already nursed through the outgassing stage. Sometimes you can get lucky and find beautiful stuff, which you can then space clear to remove the previous owners’ frequencies.

If you’ve already bought furniture that is outgassing, then you could seal the fibreboard with a paint, varnish, or polyurethane-like material (one that doesn’t contain formaldehyde, obviously), and make sure you cover not just the flat surfaces but all the ends too. The main problem with this is that many of these sealants contain other toxic volatile organic compounds (VOCs) that you would not want in your home. However they tend to outgas for a much shorter time so would be the lesser of two evils. I’ve never tried this remedy myself, but if you already have furniture that is causing you health problems, it could be a more affordable solution than replacing it.

Something else you can do is to make sure your home is well ventilated. You can also reduce other sources of formaldehyde emissions by not using carpet glue, paints, curtains or bedding materials that contain it. When you start to look into it, it’s in so many things. Even ironing boards are usually impregnated with formaldehyde, causing you to breathe warm toxic vapours as you iron.

It’s is also found in many cosmetics and beauty products, such as nail polishes, nail hardeners, shampoos, make-up, soaps, bubble-baths, deodorants, lotions and, of course, hair products. Hair straighteners have some of the highest concentrations of formaldehyde of all. You may also want to check the content of your household tissues. If you get a sore nose after using them, they probably contain added formaldehyde to make them more absorbent.

In B.C. Wolverton’s book, How to Grow Fresh Air, he lists various plants that can be used to reduce formaldehyde levels, and there is convincing evidence that they can when used in sealed chambers. In the real world, however, you would need so many plants to achieve this that it would almost certainly be impractical, although a company based in the US has now been licensed by B.C. Wolverton to create a fan-powered air purification system that allows one plant to do the work of 100 plants. Until this becomes widely available, as hopefully it will, the best remedy by far is to avoid formaldehyde outgassing in the first place.