Some people like to keep keepsakes to help them to remember a particular person, place or event. But how many keepsakes can a person keep before they become keepsake clutter? 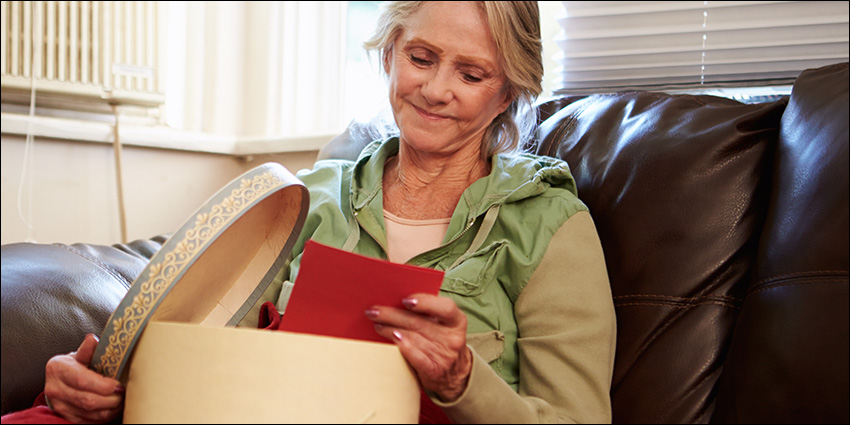 A clutter clearing client once gave me a guided tour of his keepsakes room. It contained items from his childhood, past romances, his current relationship and various events in his life, as well as items that once belonged to his parents and grandparents.

None of it was ever used, so it was all covered in a thick layer of dust.

None of it was organized either, which was how he liked it because it meant that any box he opened was full of surprises.

And none of it meant anything to anyone at all but him. That didn’t bother him at all, but he was getting on in years so one day whoever takes responsibility for clearing out his house after he dies will almost certainly have it all taken away and thrown into landfill. That thought bothered him a bit, but it was only the sorry fate of the items that concerned him, not the time-consuming task he would be leaving to his executor. As far as he was concerned, these items represented the history of his life and would be with him to the end.

Thankfully, most people don’t have an entire room full of keepsakes in their home. But it is becoming more usual for people to keep a memory box full of keepsakes, and a global industry has now sprung up around this. You can buy a special box to keep all your mementos in and a large range of specialty items you never realized you needed to go with it.

The first time I came across the concept of a memory box was when in 1997, when I first visited the United States to teach clutter clearing and space clearing workshops. Someone asked me a question about the contents of their memory box, and my only response was a blank stare. The class, which had already explained to me that Americans have closets, not wardrobes, and wear sweaters, not jumpers, assumed this was another American-British English translation issue and attempted to clarify. But it really was not an idea I had come across before in my life in the UK.

Fast forward to the online clutter clearing courses I’ve been teaching since 2013, which have so far been taken by participants from over 60 countries around the world. I’ve noticed in these classes that it’s still far more common for Americans to have memory boxes than any other nationality, but the idea has definitely spread to other cultures and also developed into different types of memory boxes.

In one client’s home, while clearing out a drawer in her bedroom, we came across a scruffy matchbox that contained all the teeth her children had ever shed, mingled together with small locks of their hair. She had no idea which of her three children each item belonged to and hadn’t looked in the matchbox in over 40 years, but it had stayed with her through every house move she had made and she didn’t want to let it go.

These days you can buy elegant silver-plated matching tooth and curl boxes to keep these items in. You can get baby handprint and footprint kits, and a whole range of toys, plates, clocks and other commemorative items. Some people keep the bracelet their newborn wore in hospital, the first clothes they wore, the first shoes they wore, and so on.

There is also such a thing as a baby keepsake book, in which the events of the mother’s pregnancy and the baby’s early life can be recorded. It’s usually given to the mother and is just a bound book with blank pages and an exorbitant price tag. I can’t begin to tell you how many mothers I’ve heard from who feel guilty because they have received such a book and haven’t made all the entries in it (or any entries in it) that they feel they should have made.

These items may be kept by the child themselves or kept by the parents. They consist of things such as childhood art creations, clothes, toys, teddy bears, books and report cards. When the child grows up and leaves home, they are usually left behind in the family home, either because the person doesn’t care enough to want to take them with them, doesn’t have any space to keep them, or because one or both of the parents want to hold on to them.

These can be from childhood or adult life. They are items purchased, gifted or acquired in some other way that are associated with a special event, such as a trip, a friendship, a romance or a life-changing moment of some kind. They often take the form of ticket stubs, leaflets or photos, but can be anything at all, such as a pebble picked up on a beach or a beermat stolen from a pub. They usually have no value at all and no significance to anyone except the person who has kept them.

This is a huge commercial market that has opened up in recent years. Bereaved people can now buy a framed “in loving memory” photo of a deceased person, an engraved paperweight, a candle, a heart-shaped engraved rock and various other types of ornaments. For a very reasonable price, you can pay to have a rose or even a star named after someone who has died. For quite a bit more, you can have their cremains incorporated into a memorial ring, earring, pendant or other type of jewellery you can wear, or into a piece of art that you can hang on the wall. New ideas for immortalizing people are being thought up all the time.

What are keepsakes really?

What all keepsakes have in common is that they are an attempt to hold on to a memory of the past. The items are kept because they remind a person they loved or an event that was significant for them in some way.

But how beneficial is it to do this? Does holding on to things from the past really help anyone to have a happier life?

In my own experience of working with clients, the more items they keep from the past because they have a story attached, the less happy they are in the present and the less they have to look forward to in the future. The lovely thing about letting go of the past is that it frees you up to live more fully in the now and create a better tomorrow.

Personally, I don’t own a single item from the early years of my life except for a few photos I keep in digital format. And, apart from a handful of difficult or impossible to replace books, I only own one item that dates back to before 2010, when I moved from Bali to the UK, and it’s something that I love and use every day. I don’t feel my life lacks anything because I don’t keep anything to remind me of the past. In fact, as I wrote in How to let go of childhood memorabilia, I’m sure that being unencumbered in this way has brought me greater freedom to change and grow. And moving house is certainly much easier because I don’t have to drag mounds of memorabilia from one place to the next.

So is it OK to keep a memory box?

We humans are the only species that keeps things for sentimental reasons. A dog may bury a bone and a squirrel may hoard nuts, but that’s instinctive food hoarding. Animals don’t keep souvenirs.

The real question here is whether keeping sentimental items is normal behaviour for humans or not? The fact that it’s becoming more common for people to have memory boxes offers no clues because that could mean it’s a useful development or it could equally be that a whole generation has become more neurotic.

In my experience, it all comes down to why you keep the things that you keep. What is healthy behaviour for one person will be neurotic behaviour for another, depending on their reasons for doing it.

Here’s how to manage a memory box, if you have one

Related article
Photograph your sentimental clutter and let it go

3 Responses to Keepsakes and memory boxes