Is your cell phone zapping you while you sleep? 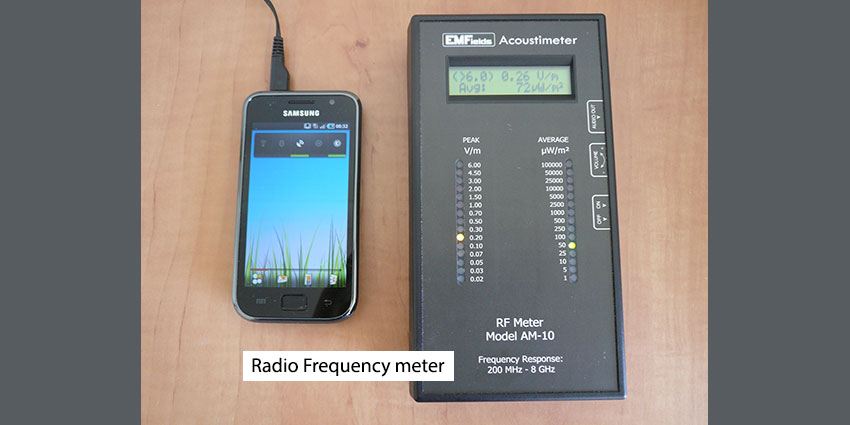 That man I posted about yesterday who sleeps with his iPod and cellphone under his pillow – it’s worse than I thought. It turns out he sleeps with them plugged into the mains and recharging too!

I don’t know what type of cell phone he uses, but here are some meter readings for a cell phone that has reasonably low output compared to some that are available. The readings were taken with the phone on standby, as it would be under his pillow each night, constantly polling for signals.

The microwave meter photo shows a peak reading of 6.0 volts per meter. The level at which health problems can start is above 0.5 volts per meter, or even 0.05 volts per meter in people who are electrosensitive. So he’s subjecting himself to at least 12 times what’s considered to be a safe level. 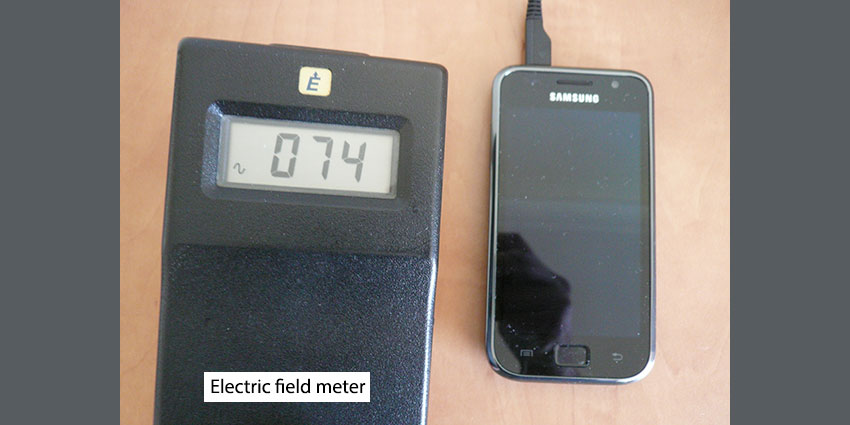 The thing is, this is easily remedied. All he needs to do is plug his iPod and phone in well away from his bed, meaning not on his bedside table but on the other side of his room, or better still, in another room. If he really wants to keep the phone turned on all night to receive calls and messages, providing his bed is not between his bedroom window and where he plugs in his phone, that should be fine too, although I would never do this myself.

When visiting client’s homes to do consultations, I’m continually amazed by how many people recharge their cell phones right next to their head on their bedside table. When I bring out my meters and show them how much they’re zapping themselves in their sleep, they often unplug the recharger then and there and move it. Usually within a week or so I receive an “OMG” message to say that they’re sleeping so much better and waking up feeling full of energy rather than having to drag themselves out of bed every morning. After years of sleeping in an electromagnetic smog, it comes as a huge surprise to them to discover what ‘normal’ waking up can be like.

And where can you get one of these meters if you want to check this for yourself? I recommend those manufactured by EMFields. I’ve had my EmFields pro meter for over 20 years and it’s still going strong. I never go travelling without it. It’s not the cheapest around, but it certainly is the most accurate and reliable I’ve found.

Related article
How healthy is your home?

5 Responses to Is your cell phone zapping you while you sleep?