How you can help to end the fast fashion fiasco

The global textile industry is worth about 1.3 trillion US dollars and is now the second worst polluter of the environment after oil. It’s not sustainable. Something has to change. 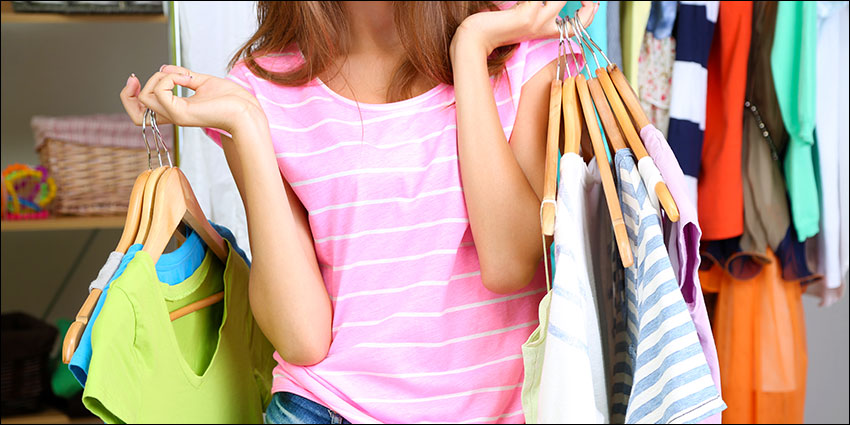 Until fairly recently, no one gave much thought to recycling clothes. In most parts of the Western world it was simple enough to donate any unwanted items to local charity shops without a second thought. They easily and effortlessly disappeared out of our lives.

But times are changing.

No one wants your unwanted clothes any more

I ran a Fast Track Clutter Clearing online course earlier this year with participants from 18 countries. Word started filtering back to me that some charity shops were so overloaded with post-Christmas donations they were not accepting any more items.

But that was just the tip of the iceberg. The bulk of clothing donated to charity shops never gets sold as second-hand clothes at all. Most of our cast-offs don’t help people in need, as we fondly imagine. Instead, they are sold for recycling or rags.

It used to be the perfect formula. China used cheap labour to make clothes for western manufacturers at a fraction of the price they could be produced in the West. They delivered these clothes by ship and used the return journey to haul away the vast quantities of garbage that western countries didn’t want, including mountains of used clothing. Back in China the garbage was sorted (using cheap labour again) and recycled iinto new products that were again shipped to the West. And so the cycle continued.

Except that this no longer works.

A tipping point was reached where the immense wealth generated in China by all this trade created a new middle class who were hungry for the same affluent products that had been shipped to the West for so many years. As a result, China now has a huge recycling problem of its own. And as wages have increased, cheap labour has become less available to sort through contaminated recycling from the West.

Western municipalities have been scrambling ever since to find alternative options. For years, we’ve been trained to dutifully recycle everything we can but now municipal services can’t afford to process it or even incinerate it. In the US, some towns have suspended their recycling programs altogether, admitting that whichever bin people put it in, it now all goes to landfill. The old system has fallen apart.

Fast fashion lies at the root of the problem

Some countries manage their recycling better than others, it’s true. But no matter how well they do this, the problem will never be resolved until the core of the issue is addressed. Nothing will change until consumers understand the damage to the environment that low quality mass-produced fast fashion is causing.

Fast fashion is all about quick sales at throwaway prices. Retail chains churn out new designs as often as every two weeks and at such cheap prices that many people can afford to wear something once or twice and then throw it away like a discarded food wrapper.

And why does fashion change so fast? There is only one reason — so that clothing manufacturers can make more money. With millions of tons of clothing now going to landfill every day, this practice has been exposed for the obscene waste of planetary resources that it is. The recycling crisis is finally causing people to wake up and want to make changes.

The new slow fashion movement advocates classic styles made from high quality, sustainable materials. It embraces the concept of timeless rather than trendy. It promotes well-made clothes that we’ll want to keep and wear for years, as previous generations used to do.

Best of all, it sends a firm message to all the manufacturers of the cheap, synthetic clothes that are mostly all you can find in chain stores these days. It says enough is enough.

Yes, it will take time for this movement to take effect but it’s quickly gathering momentum. Western countries are offloading their rubbish and recycling to other Third World countries, but it’s only a matter of time before what happened in China repeats itself, and what will we do then? Fast fashion is not sustainable. One way or another, its days are surely numbered. We can all do our part by adopting slow fashion and saying no to all the rest.

Related article
How to declutter your clothes with confidence