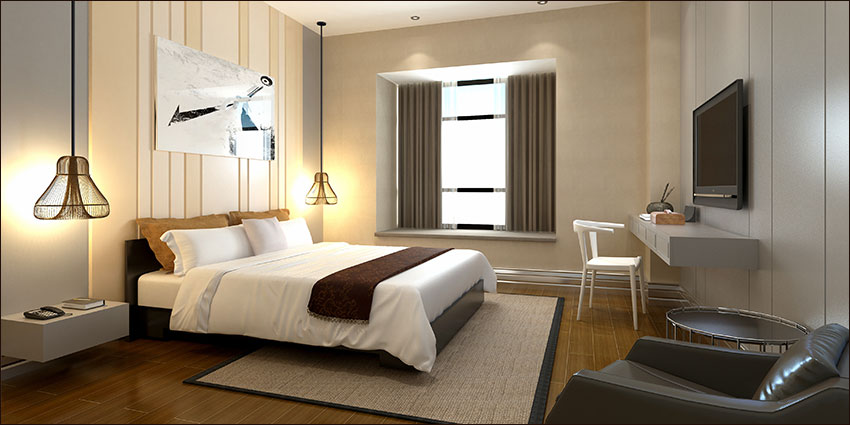 The National Sleep Foundation’s website is a veritable hive of interesting information. Buried in a 2005 survey, for example, is the little-known fact that 31% of American couples were sleeping in separate beds or had separate bedrooms. Similar UK studies put the figure at around 24% of British couples.

Fast forward to 2017, and an article published in the Architectural Digest says that dual master bedrooms are the now hottest new amenity in luxury homes. What’s going on?

Why some couples are sleeping apart

Historically, in western countries, only working-class couples used to sleep together. Those who were wealthy enough would have separate master and mistress bedrooms.

Now the trend is reverting back to this, incorporating two equally grand master bedrooms at the design stage of upscale homes, so that couples who prefer to sleep apart can do so in equal comfort and style rather than one partner having to slum it in a guest room or on the living room sofa. Sometimes the dual master bedrooms are on the same floor, perhaps sharing the same bathroom, and sometimes they are completely separate, or even on a different floor.

But social stigma about this means that very few people admit to it, except in anonymous surveys. They worry that others will take the view that the marriage has broken down. This may sometimes be the case, but there are other situations where sleeping apart is best for both partners.

Separate bedrooms – what are the benefits?

When one partner snores, has sleep apnea or breathes so heavily that it disturbs the other person, it can be a blessed relief to both – and often a marriage saver — to decide to sleep in separate rooms. The snorer feels less guilty and the non-snorer finally gets a good night’s sleep.

Many couples valiantly try all kinds of remedies to resolve the problem before admitting that this is the only real solution. And the problem is widespread. The global anti-snoring industry was valued at $750 million in 2015 and is increasing each year, as more and more people seek help.

Different body clocks or daily schedules can be another very good reason to sleep apart. If one partner is an early bird and the other is a night owl, separate bedrooms will give each person the freedom to do as they like. It can also be beneficial if one person needs to get up earlier for work than the other, or to take care of the children while the other slumbers on. Or if one partner likes to read, watch TV or use their phone in bed for a while before sleep and the other prefers to turn the lights out immediately.

Sometimes separate bedrooms are the only way to resolve environmental incompatibilities, such as one partner preferring to sleep with a window open, a white noise machine running, or the light, fan, air-conditioning or heating turned on. The other partner may try using earplugs or an eye mask to block this out, but it only feels tolerable for so long.

Another reason to sleep apart is if one person has a serious health problem, which means they never get a good night’s sleep themselves and frequently disturb their partner too. Caring for someone who is sick can be physically and emotionally demanding, and sleeping in a separate bedroom – even if only from time to time – can help to recharge the carer’s batteries.

Then there is the issue of allowing a child or pet to sleep in the bed or in the room. When one partner really wants this and the other staunchly does not, separate rooms are the only solution. This can also be a choice that is made when a couple have a new baby and one of them frequently has to get up in the night to attend to its needs.

Another benefit of separate rooms that most people don’t realize until they do it is that each partner gets to choose their own bedroom décor. If they have very individual tastes, this can be an unexpected bonus.

And let’s not forget the common blanket-hog complaint between couples, where one person tends to pull the covers off the other during the night. This never happens when you sleep alone. Or another common issue, especially in summer, when there’s no physical contact anyway because it’s just too hot.

Last but not least, for couples who are engaged in a path of personal development, a little-known fact is that in order to move to a new level, there can be times when it’s necessary to take a break from the etheric immersion of the relationship by spending a period of time sleeping apart. After the transition has been made, the relationship can then re-engage at a higher level.

What about separate beds?

If one partner has restless leg syndrome, hot flashes or night sweats, for example, separate beds in the same room will enable the other person to get a good night’s sleep.

If one person prefers a soft mattress to a firm one, it’s possible these days to buy a double mattress that is split down the middle into two qualities of firmness. But if this isn’t enough, separate beds in the same room will allow each person to have exactly the type of mattress they like or need.

Some couples prefer different types or layers of bed covers. Sleeping in a double bed with two single duvets of different tog ratings can help, but if this doesn’t work, single beds may be the answer.

What? No more cuddling? No more sex?

This is the first thing most people think of when the topic of separate sleeping arrangements comes up, but sleeping apart certainly doesn’t need to mean an end to intimacy.

In the animal kingdom, members of the same species often sleep together for warmth and safety but very few mates sleep together and there is little or no association between sex and sleep. This can also be seen in Bali, one of the most sexually aware cultures on the planet, where couples rarely sleep together but there is still plenty of sex going on.

Separate bedrooms in the West mean that opportunistic sex is no longer so easy but, with a little effort, more meaningful sex can replace it. Jennifer Adams, author of Sleeping Apart Not Falling Apart, suggests having an agreement that either person wanting to have sex can slip into the other’s bed at any time.

Shevonne Hunt, presenter of a parenting show on Kinderling Kids Radio, is adamant that sleeping apart has saved her marriage. She says her husband snores so badly that in ten years, she has only slept with him for 30 or 40 nights, yet there is no lack of intimacy in their relationship. She points out that there are many couples who share a bed who have no intimacy at all, so it doesn’t depend on who sleeps where.

A 2017 Silversurfers poll revealed that 84% of happily married over 50s thought that sleeping in separate beds makes good sense. ‘You don’t have to share a bed to love each other’, one person commented.

And couples in their 20s are finding they sometimes prefer to sleep apart too, as a 2017 Sunday Times article, What’s wrong with separate beds? revealed. This choice may be made for one of the reasons already mentioned or simply because each person likes to have their own space.

The deeper reasons why more and more people snore or have disturbed sleep these days is another topic entirely but what’s clear is that for many, sleeping apart can have physical, mental, emotional and even sexual benefits, leading to a better quality of life all round. We need to rethink whether the taboo about this is outdated. Dual master bedrooms is now a well-established trend.

Related articles
How big is your bed?
30 remarkable health benefits of sleep

Do you and your partner have separate bedrooms or sometimes sleep apart? Is that working for you or not? Please share your experience in the comments section below.

4 Responses to The modern trend for dual master bedrooms