Wait, is that clutter you want to offload onto me?

It’s quite common for people to offload their clutter onto family and friends. So before you accept a gift of this kind, make sure it is something you really want. 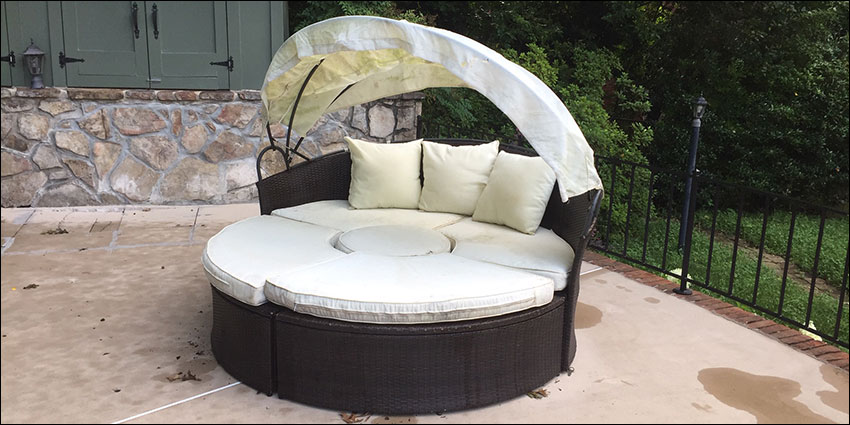 Have you ever been the recipient of things that people no longer want but feel unable to trash or donate? You’re not the only one. It happens much more often than most people realize.

A memorable example of this that I heard about recently was the large outdoor chaise lounge you can see in the photo here. It measured about 5.5 feet in diameter (1.7 metres) and took up a fair bit of space.

It was an impulse buy that the original owner soon realized was too big for her deck area and highly impractical because the white cushions got dirty so quickly. Not only that but it wasn’t even comfortable to sit on because the modular design meant it didn’t stay together properly.

So she knew it had been a bad buy. But instead of admitting it, she gave it to her friend, hoping she could do something with it. And there it sat, stacked up in a corner of her friend’s previously uncluttered pool area, looking like an eyesore and nagging her to do something about it. 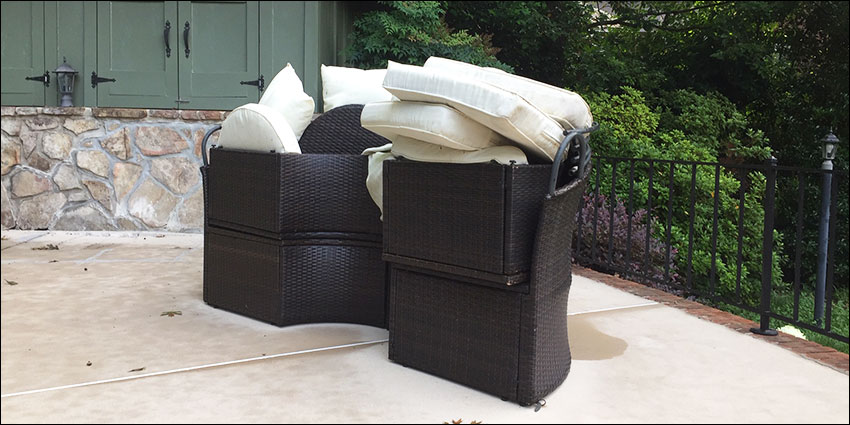 The friend’s first thought was to buy new cushion covers ($400-$500, so much too expensive). She considered making new covers herself (more affordable but it would take a lot of her time). After much searching, she found a cheaper option (only $100) but didn’t like the fabric. Four years later the chaise lounge was still there, with no solution in sight.

At that point, she called a charity and arranged for them to collect it, along with some other items she was ready to let go of. From there it hopefully found a new owner who was willing to reupholster it and somehow correct the design flaws. Or it became clutter that the charity eventually had to pay to get rid of.

When a gift becomes a burden

Another type of gift you may unwittingly become the recipient of is an item that has sentimental value to the giver. The person decides they want to let it go because it is taking up space in their home. But instead of throwing it away or donating it to a charity, they give it to a family member or a friend. By doing so, they are able to clear it out of their own home but still know where it is. In other words, they don’t really let it go.

The gift will usually be accompanied by a long story about how the item came into the person’s life and how much it means to them. The recipient then feels obliged to keep it because it meant so much to their relative or friend.

My best advice about this? Accept the love that comes with the gift but don’t buy into the obligation of keeping it. If it becomes clutter to you, let it go as you would let go of any other item. A friendship that requires you to keep clutter in your home for the other person’s sake is not a healthy friendship at all.

A more complex version of this scenario is where the giver died many years ago but the recipient still keeps the gift out of respect to their memory. They don’t use it or like it and it means nothing to them personally, but they feel consumed by guilt if they even think about letting it go.

This is called misplaced guilt. Guilt is a powerful emotion that stops us from breaking the rules of social conduct. But it varies so much from person to person and culture to culture that you have to ask yourself, is this really wrong or is it just a belief I’ve acquired from somewhere? Who told me that it offends the dead to let go of their sentimental clutter?

What’s needed here is an understanding of the death process itself. In Death, The Great Journey, Samuel Sagan explains that the phase of afterlife wandering can last for a few weeks after the death of the physical body. But after that the shattering of their astral body is complete and they no longer exist as the person we once knew. So feeling guilty about letting go of an item a deceased person once owned is always misplaced after that time because they no longer care about or have an awareness of material things. In any case, they surely wouldn’t want you to be encumbered by clutter or guilt.

Stopping clutter before it starts

The best approach by far is never to let yourself get into the situation of acquiring other people’s clutter unless you really want it, like it and have a use for it. And that involves learning to say thank you, but no, when necessary. The first time you do it will be the toughest. After that you’ll feel so relieved, you’ll never want to accept clutter again.

One Response to Wait, is that clutter you want to offload onto me?