We need to let go of the items we no longer need responsibly. But if letting go of your clutter has become like rehoming a pet, it’s time to reassess. 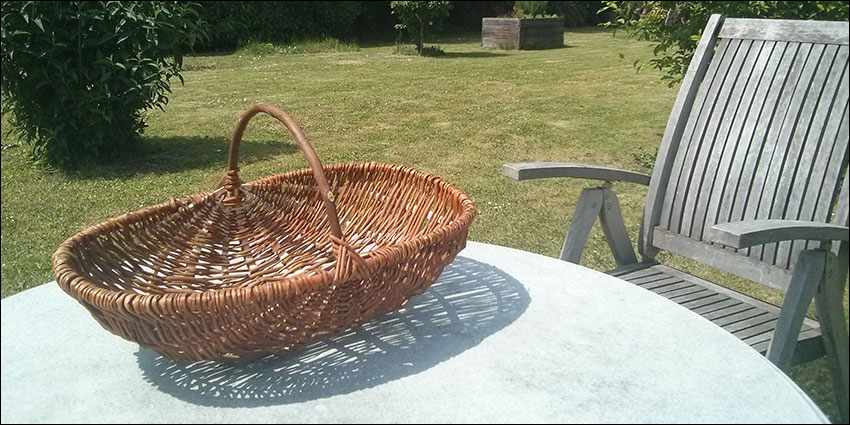 The story of the basket

It began so innocently. Kathy was decluttering to move home so she decided to set up a stall at a flea market to sell some items she no longer needed or wanted. To while away the time, she spent ten hours chatting to her neighbouring stall holder, who was selling hand-woven baskets that he made.

By the end of the day, they had both sold very little. As they were packing to leave, he decided to give her one of his baskets. ‘Oh no, I can’t possibly accept that!’ she said, knowing how long it took him to make one and how much he sold them for. But he insisted, and she finally accepted the gift.

‘The thing is’, she said, ‘I’m not a basket person. I knew instantly that the basket wasn’t anything I’d use or would want to keep. I think it’s a beautiful basket, but there’s just no affinity for baskets within me. None.’

She had just accepted clutter into her life.

Her first thought was to give the basket to a friend (everyone agreed it was beautiful but nobody wanted it). She tried using it herself for a while for vegetables. She didn’t particularly feel any need to honour the man who had given it to her but came to realize that she felt a responsibility about how to let it go.

“It’s like rehoming a pet”, she explained. “Is the next owner going to appreciate it? Are they going to take good care of it?”

On a deeper level, she also realized, “I didn’t want to be perceived by others as an ignorant person who doesn’t value things. That fear of being judged keeps me from making my own decisions and trusting myself to decide what’s right and good for me”.

These unconscious beliefs and thoughts were running her life and making it difficult for her to let go of this little basket and many other items that were cluttering her home.

Four years later, the basket was still gathering dust in Kathy’s home and she was willing to consider other ways to dispose of it.

When her housemate offered to give it to a friend to use for kindling, she agreed. Previously, she would have rejected this idea as not good enough, even though, admittedly, she had not been able to find a worthier use for it herself. But the intervening years had mellowed her sense of obligation. She even resolved that if this didn’t work out, she would simply give it to a charity shop and let its fate unfold.

‘I’m officially giving up wanting to control the destiny of it’, she stated.

As it turned out, neither of these outcomes came to be. A few days later, she happened to meet someone who owned a big country house, who gladly accepted the basket as a gift.

What has to be weighed up when clutter clearing is the virtue of finding the right home for each item versus how much you can personally make a difference in the world if your life is working better because you are not encumbered by all your stuff.

Viewed from this standpoint, if you have a major backlog of things to clear, how you dispose of items really is not so important at first. In the greater scheme of things, it is more essential to free yourself up to be of more use to humanity than to agonize over where each thing ends up. The luxury of deciding the individual destiny of items comes later, after you have got your life back on track. At first, it is just a matter of digging yourself out of the pit you find yourself in.

Yes, I know this radical approach flies in the face of environmental correctness. But I have seen people who really could make a difference in the world paralyzed for years by indecisiveness about how to let go of all the things they have accumulated in their home, and they are rendered next to useless because of this. They want to make sure their things go to a good home but, in truth, they are not the best custodians themselves. The items are stored indefinitely and never used instead of releasing them back into the world where others could actually make use of them.

The people who read my books and take my online courses generally aspire to do something in their life and know they need to free themselves from the chains of clutter to be able to do this. So if you are one of these people and the story of this basket resonates with you, please let yourself off the guilt hook.

Gift or sell some items if this can easily be done, but be willing to accept that some things will have to go to landfill or be donated to any old charity just to get them out of your home, to free yourself up to be all that you can be. Once you’ve made the decision, let go. Forgive yourself, and move on. Don’t stay stuck in the past. It’s far better that you put your time and energy into present time and learn how not to acquire clutter again in the future.