Why the best place for a clock radio is in your bin, not on your bedside table 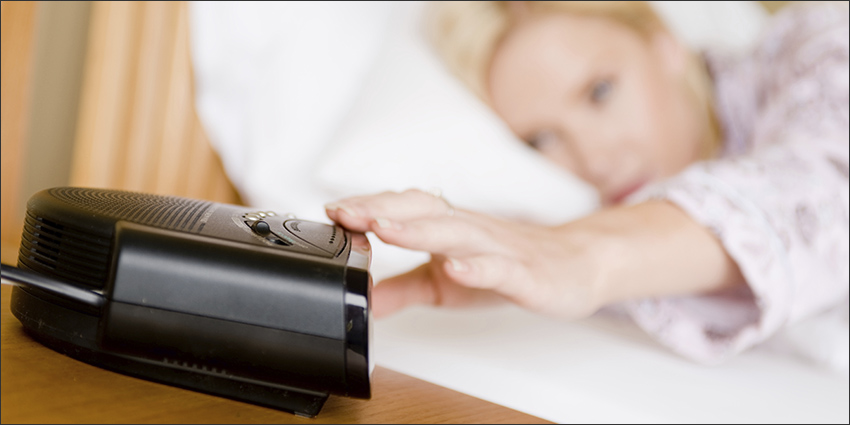 Most people who sleep with a clock radio alarm next to their bed find it difficult to wake up in the morning. They say that’s why they have one. But what they don’t realize is that their clock radio may actually be the cause.

I remember the first time I came across this during a consultation in a couple’s home. The wife really had a hard time waking up so I recommended that she get rid of her clock radio. She agreed to give this a try but instead of throwing it out and replacing it with a battery-powered alarm clock, as I had suggested, she moved it to her husband’s side of the bed instead. ‘He’s always up with the larks,’ she reasoned, ‘so it won’t affect him’.

A week later she called me to report. She was now waking easily, feeling rested and refreshed, but her husband could hardly prise himself out of bed in the morning. Totally convinced, she followed my original advice, bought a new battery-operated alarm clock, and they both slept and woke fine after that.

Why clock radios are a problem

Our homes are full of electrical appliances that emit power frequency electromagnetic fields (EMFs). The human body can comfortably tolerate electric fields of up to 5 volts per metre (V/m) and magnetic fields of up to 0.025 microtesla (µT), and most people can handle up to 10 V/m and 0.5 µT. Some types of equipment emit very much higher levels than this (hair dryers, curling tongs, electric shavers, and so on), but we only use them for a few minutes at a time so that’s OK. The problems start with appliances that emit high levels of EMFs and that we are exposed to for long periods of time, especially when sleeping, because this can interfere with the body’s ability to regenerate and repair cells.

Clock radios are usually fitted with a two-wire mains cable instead of an earthed three-wire cable, and this causes them to emit a surprisingly large electric field for their size. They also usually contain a cheap transformer that creates a high magnetic field too. I have a professional meter that is designed specifically to measure these emissions, and I have had the opportunity to test clock radios in many countries around the world in the course of doing healthy home surveys for clients. I nearly always find that EMFs from clock radios are many times higher than the safe levels recommended by experts — often 20 times higher, or more. It’s this bombardment that can cause you can wake up feeling like you need a good night’s sleep, and if it’s repeated night after night for months or years, it can cause more serious health effects too.

Another factor is that exposure to power frequency EMFs during the hours of the night is known to inhibit the production of melatonin by the pineal gland, which can cause significant sleep and health issues. The pineal gland, of course, is located in the head, so the worst place to put a clock radio is on your bedside table, which is exactly where you need it to be. Both the clock radio and the cord need to be at least a 1 meter (approx. 3 feet) away from any part of your body which, of course, makes it useless as an alarm clock because you won’t want to have to get out of bed to turn it off.

There’s now a new generation of digital (DAB) clock radios, which you’d hope would be better. But in fact they have an added problem because they also emit low levels of radio frequency (RF) noise. It’s therefore best to place these even further away from you — at least 2 meters (approx. 6.5 feet).

Most clock radios can be unplugged and run on battery instead of mains power, which results in the EMFs becoming negligible. Problem solved. However before you rush out to buy batteries, first consider why on earth would you want to habitually wake up to the cacophony of a radio station blasting in your ear? Is this really the best way to start the day?

Meditators know that the best time to meditate is just after waking, when the mind is at its stillest and the busyness of the day has not yet begun. Even speaking to someone before meditating can disrupt this internalized space. Waking up to the blare of a radio is a full-on assault on the senses that is stressful to both your body and your mind. A quiet start to the day will allow you to engage in a much more centred way.

A much better solution, if you need an alarm to wake you up, is a battery-operated alarm clock with no built-in clock radio at all. It will emit no EMFs, no RFs, and can be placed on your bedside table right next to your head with no side-effects of any kind. It is inexpensive, takes up less space, and the batteries usually last for years before needing to be replaced.

What about using a cell phone alarm?

This is an even worse idea if you also plug your phone in to the mains at night to recharge it. Both the phone and the cord will be emitting similar high levels of EMFs to those of a clock radios. And if you keep the WiFi turned on too, the RF radiation will be very much higher. The best thing you can do with your phone at night is to turn it off or put it in airplane mode and recharge it as far away from your bed as possible, preferably in another room. You’ll have much less busy dreams that way too.

Related article
Is your cellphone zapping you while you sleep?

20 Responses to Why the best place for a clock radio is in your bin, not on your bedside table