Why birdsong is so good for us

Wild birdsong is one of the most precious sounds there is. It uplifts the human spirit and brings such joy to our hearts. There really is nothing quite like it. 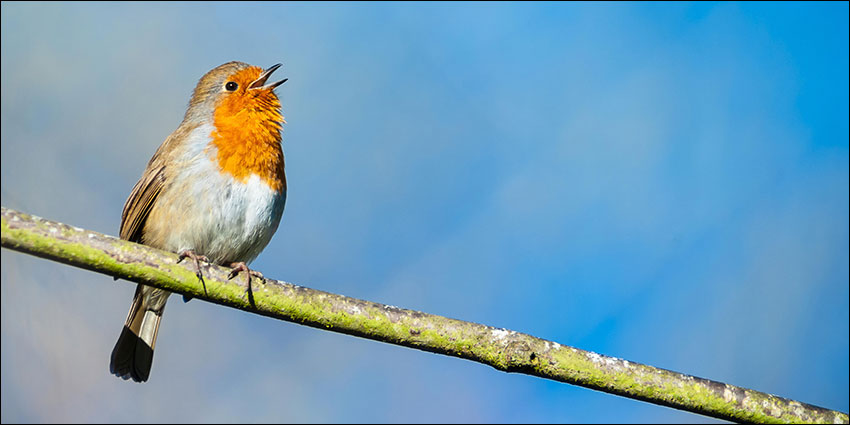 I wake up each morning to the sound of a beautiful little robin singing his heart out. He’s part of the vibrant dawn chorus of a host of birds that live in the trees near our house. It brings a smile to my face before I’ve even opened my eyes.

Not all birds are songbirds, but those that are have a unique organ called a syrinx that’s located in their windpipe, just before the point where it divides in two to go to the lungs. It’s the avian equivalent of the human larynx, but positioned much further down. It has two sets of flaps that enable a bird to make two different sounds simultaneously, like playing two musical instruments at the same time.

One of the things I loved about the 20 years I lived in Bali was the abundance of songbirds in my garden from morning till night. People who called to speak to me on the phone often remarked on the glorious symphony they could hear in the background.

Since moving back to the UK, birdsong has become a “must have” feature for anywhere I live now. In fact, whenever Richard and I go house hunting, this is so high on our checklist that we not only do a drive-by, but also park the car, open the windows and listen. If there’s no birdsong, or the quality or quantity of birdsong is weak and uninspiring, we won’t even bother to view a property.

The reason for this is that birdsong is not just inspiring and uplifting to listen to. It is also a reliable indicator of the type of energies in an area. Crows, for example, with their ugly squawking sounds, tend to frequent regions of low-level energies. Pigeons, with their repetitive cooing sounds, are mid-level. The presence of songbirds is nearly always a sign of cleaner, uncorrupted land energies.

Some sounds of Nature can be very annoying, such as dogs barking, frogs croaking or goats bleating. But just about everyone loves melodious birdsong. What makes it so special is that it’s made up of random rather than repetitive sounds, so it doesn’t get stuck in your head and irritate you. It also resonates with higher parts of yourself that can connect with feelings of joy.

These unique qualities have been put to good use in a variety of ways. In Lancaster, California, for example, an enterprising mayor had recorded birdsong played through 70 speakers along a half-mile stretch of a problem downtown area. He claimed this led to a subsequent reduction in both major and minor crimes in the city.

In Liverpool, England, Alder Hey Children’s Hospital has experimented with using piped birdsong to calm young children before surgery and other procedures. And in schools and offices, birdsong recordings played in the afternoon have been found to keep children and adults more alert, improving productivity and minimizing the effects of daily post-lunchtime slump.

How to listen to birdsong

Most people listen to birdsong through their ears, and it’s delightful to do that, of course. However, you may be interested to know that there is a completely different way of listening to birdsong that takes the experience to a whole new level.

If you’d like to try this, the best way to experience it is early in the morning when a melodious dawn chorus is in full swing. Sit or stand vertically upright, close your eyes and centre yourself. Then instead of listening through your ears, place your awareness at the centre of the top of your head and follow the line of energy that extends vertically upwards. This is a subtle body structure that every human has, known as the “central thread”.

As you move your awareness vertically upwards, find a location above your head where you can receive the sounds of the birdsong. You will still hear it with your ears, of course, but the perception will be felt above your head, a bit like tuning in through the tip of an aerial.

When you listen in this way, the energetic qualities that stream through birdsong can be experienced. It can feel like a glorious celestial symphony with tiny orgasmic sparks igniting high above your head, connecting you to higher realms of consciousness.

The uplifting effect of birdsong has been well understood in Asian countries for centuries. It’s so highly valued in Java, for example, that a recent survey found there are now more caged songbirds in the country than wild songbirds in forests, which are becoming eerily silent. Some songbirds are on the verge of extinction. It’s a very sad state of affairs.

So if you happen to live in an area where songbirds don’t naturally abound, the answer is not to buy a caged bird for your own listening pleasure. Listening to recorded birdsong is almost as good as the real thing, though. Try these links and see: