Why binge-watching is so tempting and so toxic

Binge-watching was almost unheard of before 2012. Now it’s a worldwide trend. It’s become cool to do it, even though it’s just as unhealthy for you as binge-eating and binge-drinking. 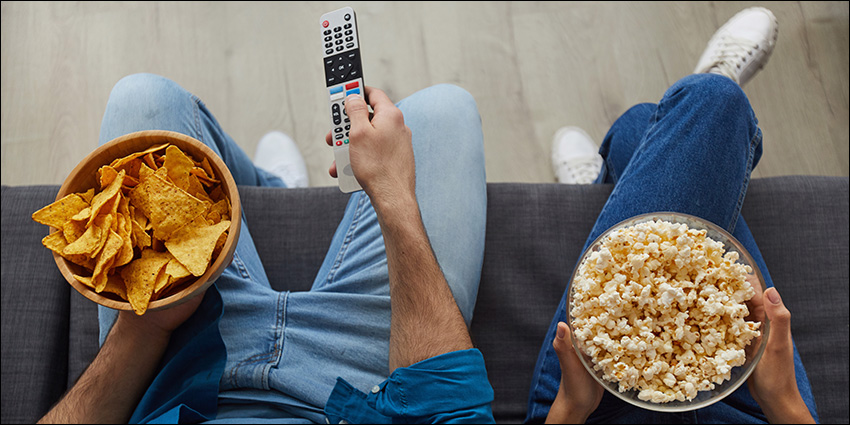 Twelve or thirteen hours later, we emerged from the cinema complex into the street-light lit night, having watched six movies in total and still eager for something more.

‘Let’s go to Tintagel,’ someone suggested. So we got in our cars and drove in convoy for seven hours from London to Cornwall. Most of us had CB radios fitted, so we bantered over the airwaves all the way there. I was in the front car, an enormous black Thunderbird, with two men in the front seat, who took turns at driving, and four of us girls in the back seat. The night flew by. It was enormous fun. I especially liked gazing out of the rear-view window and seeing the long snake of headlights behind us in the pitch-black night.

We arrived in time to see the dawn come up over the Atlantic Ocean, which we all agreed was totally worth the drive. Then we descended on the tiny village and, with the audacity of youth, knocked on the door of a local café to wake up the owner to cook breakfast for us all.

Around midday on Sunday, we began the journey home, now quite tired but still exhilarated and still in convoy, this time using our CB radios to make sure the drivers stayed awake. The next day, we were pretty wrecked from lack of sleep and all had to go to work. But we were young and resilient, and life was for living. None of us would have missed the experience for the world.

I don’t remember which movies we saw that Saturday. That wasn’t important. What we loved was the intensity of watching six of them back-to-back. Who does that? In those days, no-one. It wasn’t even a concept.

I never heard of it again until 2013, when I met a man whose business had failed dramatically. He owed so much money to so many people that he couldn’t show his face in public without being harassed. So he mostly stayed at home for two years. I imagined he must have spent the time in a drunk stupor, but when I asked him he said no, he just watched TV from morning till night.

This was before I’d tried Netflix, so I didn’t quite get how anyone could watch cable TV, day after day, without getting bored out of their tree. Of course, what he really meant was that he watched Netflix, which is very much easier to binge-watch. Now it’s so common that it’s rare to meet someone who doesn’t binge-watch, at least from time to time.

A 2019 study by OnePoll found that the average Briton spends around 78,000 hours (nearly 9 years) of their life watching movies or TV and 2,900 hours more (about 4 months) deciding what to watch. Statistics in North America are said to be even higher. And that’s before the pandemic forced millions of people to stay at home.

The effects of binge-watching

Watching a few movies from time to time is fine, as my Tintagel story illustrates. That was a once-in-a-lifetime event.

The problems start when binge-watching is done to excess, day after day, habitually watching several episodes of a series in one go. Netflix and other viewing platforms are cleverly designed to entice you to watch just one more, then another. They want to suck you in. It’s hard to resist.

Binge-watching releases dopamine, which is a natural high that makes you feel good. We all enjoy that. However, the cumulative effect over time can be toxic. It’s a form of gluttony, in much the same way that binge-eating and binge-drinking are, and it can affect your physical, mental and emotional health.

Addiction – It’s possible to become addicted to the dopamine hit you get from binge-watching, to the extent that it becomes the high point of your day instead of you engaging with life and creating high points of your own.

Escapism – Following the story line of a series can bring some temporary relief from anxieties and problems, but if you become too absorbed in it, it can result in you neglecting your own relationships, responsibilities and goals.

Isolation – While binge-watching, you are not emotionally available to others, which can cause you to become isolated.

Sleep disruption – Blue light emitted by screens disrupts melatonin production, so late-night viewing can cause insomnia or restless sleep. Be careful what you watch near bedtime, too. The content is likely to feature in your dreams, which may take you to some dark astral spaces.

Sleep procrastination – Wanting to watch just one more episode (and then another) can keep you up long past when you intended to go to bed, resulting in sleep loss and fatigue the next day.

Obesity – Snacking while binge-watching is almost inevitable, and so is the weight gain that follows.

Health problems – Couch potato posture can cause back problems and shallow breathing that reduces the capacity of your lungs. Staring at a screen that doesn’t have an anti-blue light filter can cause eye strain, dry eye and macular degeneration in time. Long hours of physical inactivity can increase your risk of heart problems.

Depression – That empty feeling when a series finishes is your body’s reaction to dopamine loss and your psychological reaction to being thrown back into the reality of your life.

If you’ve ever lied to yourself or others about how much you binge-watch or habitually promised yourself you’ll only watch one episode and then it’s turned into more, it’s time to take action.

How to manage binge-watching