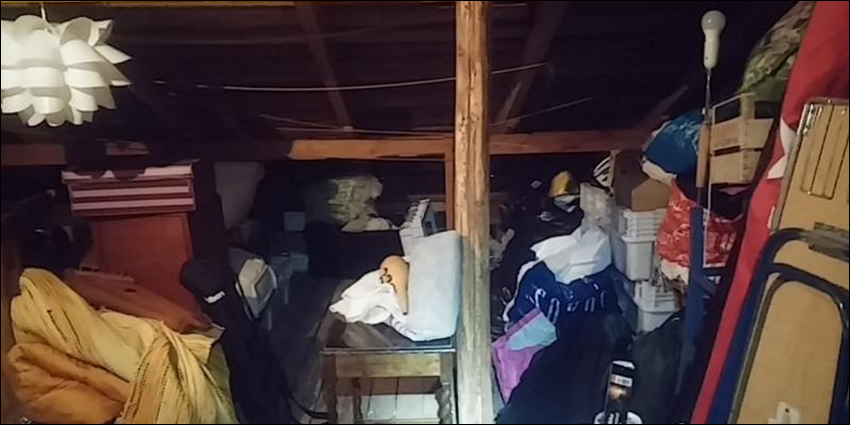 ‘There’s something missing from your book,’ a woman once told me, in very stern terms. She then sat me down and told me the story of how she had married a man who had turned out to have hoarding behaviour, and how it had caused years of anguish and strife before she eventually gave up trying to change him and left.

‘Always check a person’s attic before you agree to marry them,’ was the important piece of advice she felt I had failed to include in Clear Your Clutter with Feng Shui, and it’s definitely a wise tactic if the person you plan to marry already has a home of their own. Their attic and also their basement, garage and cupboards will yield many clues.

She said that if she had just taken the time to climb the step-ladder to his attic and poke her nose up there, she would have called the whole thing off. But she didn’t, and he brought all his stuff with him, and that was just the start of it. As the years passed by, he got worse and worse, his stash got larger and larger, and he wouldn’t throw anything away. In the end, she had to move out, leave him with it, and start her life over again.

To be fair, when she met him, he still had control of most of the rest of his home. It was dirty and disorganized but she figured that was just his bachelor style of living and she’d soon lick him into shape. It was only later that it turned into full-blown hoarding, as he continued to acquire items he didn’t need and wasn’t willing to part with a thing.

Like the stash in his attic, every item had special significance or value to him, even though it might only be something he picked up in the street on his way home. Once it was in the house, it belonged to him and was there to stay, regardless of whether there was room for it or not.

Worse still, after a while, she wasn’t allowed to throw anything away either, except for kitchen garbage and garden weeds. She had read my book and liked to live a clutter-free life, but every item she discarded had to be disposed of in secret to avoid emotional reactions from her spouse. She resorted to smuggling things out of the house and putting them in public waste bins to avoid the arguments she knew it would bring.

What can be done in this situation?

It’s difficult for love to thrive in such an environment. No matter how much you care for someone, their compulsive behaviour becomes like a barrier between you and them. It increasingly feels like the person you once knew is lost. If asked to choose between you and their stuff, you know you would not win.

According to the International OCD Foundation, at least 2% of the western population suffers from hoarding disorder and the real figure may be as high as 5%. That’s one in every 20 people. It’s much more widespread than most people realize.

Yes, there are various kinds of therapy available, but it’s usually a long, slow process, and the person has to want to change. Until they make that decision themselves, the sad fact is there is very little anyone can do.

If you find yourself in a relationship with someone who has hoarding disorder, my best advice is to read up on it and learn all about it. Give your partner as much help as you can. But also be sure to take care of yourself and get the support you need so that the problem doesn’t drag you under too. If it comes to the point that you need to separate, you are probably the one who will have to leave the home and start afresh, so you need to be prepared for that.

Related articles
An insight into hoarding